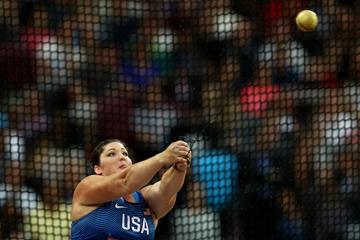 With four-time champion Anita Wlodarczyk sidelined with injury, the focus here will fall on the US trio of DeAnna Price, Brooke Andersen and Gwen Berry who occupy the top three spots on the world season's lists, a first in the event for the North American athletics juggernaut so late into a season. Indeed, hopes are high that one of the three will secure the first medal in the event for the US at a World Championships.

Price, the winner of last year's IAAF Continental Cup, appears to be the likeliest candidate.

The 26-year-old, who reached the 2016 Olympic and 2017 World Championships finals, has won five of her seven competitions and produced the season's two farthest throws, a 77.43m effort in Bloomington in late June and a 78.24m North American record to win the US title in late July. That's nearly a metre and a half better than anyone else in the world.

Berry, 30, finished second to Price at the US Championships with a 76.46m effort, her season's best, and two weeks later took the Pan-American Games crown. Andersen, who reached a lifetime best of 76.75m this year, has thrown farther than Berry, but like Berry, has struggled with consistency.

More likely to challenge Price will be China's Wang Zheng, the bronze medallist in 2013 and runner-up in London two years ago. While she hasn't thrown quite as far – her season's best is 76.26m from July's national championships – she has been the event’s picture of consistency in 2019. Wang has won 11 of her past 12 competitions, including the Asian title at Doha's Khalifa Stadium in April, leads the IAAF Hammer Throw Challenge standings by more than two metres, and owns four of the season's 10 best throws.

The 24-year-old Kopron was a surprise bronze medallist two years ago and threw her season's best of 75.23m in her final pre-Doha competition to win the Skolimowska Memorial on 14 September.

Fiodorow, twice a bronze medallist at the European Championships, has a 74.71m season's best from early June but has impressed in her run-up to Doha, winning the Europe-USA match on 10 September and finishing second to Fiodorow in Chorzow four days later. Fiodorow was sixth at these championships two years ago.

Others expected to figure in the podium chase include Alexandra Tavernier of France, the world bronze medallist in 2015 who improved her own national record to 74.84m in June, and Hanna Malyshik of Belarus, also a world and Olympic finalist who has reached 74.95m this year.