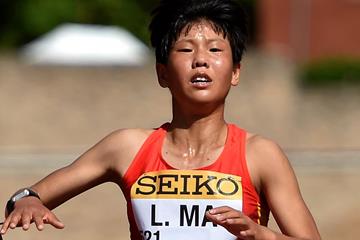 When Ma Li lines up for the U20 women’s 10km at the IAAF World Race Walking Team Championships on Sunday (6), the Chinese 18-year-old will be aiming to improve on her second-place finish two years ago and take the top honours for the host country in Taicang.

The U20 women’s 10km race at the last edition of the biennial tournament in Rome witnessed a thrilling duel in the final 300 metres between Ma Li and her compatriot Ma Zhenxia, who was the world U18 champion and Youth Olympic champion.

As the youngest athlete in the field, Ma Li just missed out on delivering a surprising victory and had to concede a narrow defeat by only six thousandths of a second.

Both of the Chinese finished with a 45:25 clocking in Rome, which marked the first time any race at any World Cup had seen leading race walkers finish on the same second.

In spite of the close defeat, the silver medal gave a huge boost to her confidence and Ma Li started to forge her dominance among her peers in China. She has won a series of junior titles nationwide over the past two years, including the 10km gold medal at the Chinese National Games last year and the victory in the qualification event for the World Team Championships two months ago in Huangshan, where she bettered her personal best to 44:15.

Ma is currently second on the 2018 world U20 list but is the fastest of the athletes toeing the line in Taicang, which makes her the top favourite for the individual gold.

In their defence of the team title, Ma will be joined on the Chinese team by Li Wenxiu, who trailed half a minute behind to finish second in Huangshan, and Yang Weiwei, who owns a PB of 44:21.

Turkey’s Meryem Bekmez is another sub-45-minute raace walker in the field. She set her PB of 44:58 last year in Antalya and has enjoyed a flying start to this season, winning all four of her races so far, including two at 5000m and two over 10km. She clocked a season’s best of 45:09 in February.

More importantly, Bekmez has significant experience in international competitions. She is the European U18 champion and world U18 silver medallist.

As Bekmez’s compatriots Ayse Tekdal and Kader Dost both have improved their 10km career bests in 2018, Turkey could be the biggest threat to the hosts in the team event and Bekmez stands a good chance of earning two medals in Taicang.

Alegna Gonzalez of Mexico and Japan’s Nanako Fujii are also serious contenders in the individual event.

Ecuador’s world U18 champion Glenda Morejon also has the potential to make it on to the podium, but the 17-year-old has yet to prove her form in 2018. Her most recent performance dates back to last October when she clocked a PB of 45:16 to win the 10km event at the Hauppauge Race Walking Championships in the USA.