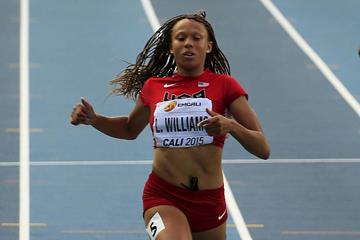 If this event plays out according to the form chart, the USA will be in a strong position to produce the first national 1-2 200m finish since Nigeria took gold and silver at the inaugural edition in 1986.

Just 0.02 separates Lauren Rain Williams and Tamara Clark at their best, the former clocking her 22.51 PB in Tucson in late April and the latter, 22.53 in Tampa on 25 May.

Neither have come close to that since, but both have put in consistent sub-23 clockings, particularly Clark who's produced four of the season's seven fastest U20 performances, all at 22.73 or better. Williams, meanwhile, took the national U20 title in a wind-assisted 22.84, beating Clark into third place in their only 200m head-to-head.

Jayla Kirkland, the 2015 world U18 100m bronze medallist and 200m runner-up at the national junior championships, is also entered, but only two from any member federation can start.

Australian Riley Day is the fourth entrant with sub-23 credentials this season and arrives as a solid medal threat. Riley made a splash when she took the sprint double at the national senior championships in February, clocking 11.56 and 22.93. She later reached the 200m semi-finals at the Commonwealth Games, 13 days after her 18th birthday.

Jamaica hasn't claimed a medal in the event since 2004, and hasn't produced a winner since Veronica Campbell's triumph in 2000. The Caribbean island nation's hopes lie with rising star Briana Williams, the 16-year-old who captured the Carifta Games U17 sprint double in 11.27 and 23.11, the latter a personal best, and Ockera Myrie, the U20 Carifta winner and national junior champion. She set her 23.31 personal best in late March.

Some others to watch include authorised neutral athlete Polina Miller, a semi-finalist at the European U20 Championships last year who improved to 23.15 in May, and 19-year-old Martyna Kotwila of Poland, who has clocked 23.27 this year.