Zewdu made his marathon debut at the Dubai Marathon in January, clocking 2:06:31 to finish 10th. He'll be joined by compatriot Tsegaye Getachew, the next fastest in the field with a 2:06:50 career best, set at the Valencia Marathon last year where he finished eighth. Earlier in the year Getachew won the Dalian Marathon in 2:11:25, his first and to date only international victory over the distance.

Felix Kimutai, with 2:09:23 credentials, leads the Kenyan contingent. The 31-year-old won here in 2018 and finished third one year ago.

Local hopes will rest with Yavuz Agrali, who set his 2:10:41 lifetime best in Seville in February.

Chemtai, who made her marathon debut last year, leads the women's field. The 26-year-old Kenyan clocked 2:22:07 at last year's Ljubljana Marathon, finishing third. She has a 1:07:07 half marathon best from 2018.

She'll face a pair of formidable Ethiopians, Hiwot Gebrekidan and Yeshi Kalayu Chekole. Gebrekidan has a 2:23:50 career best set in Guangzhou last year while Chekole, 23, has a 2:24:28 best set in Abu Dhabi, also one year ago.

Organisers have put several measures in place to ensure the safety of all runners, beginning with a cap of 3000 participants.

The start and finish area was moved to a massive open space to ensure a safe distance between the runners both before and after the race. The area will be secured, barring entry to anyone without a clearance code provided by Turkey's Ministry of Health. A negative test for Covid-19 was required to enter the race.

All participants, including the elite athletes, will be required to wear face masks at the start, and will be able to dispose of them in designated boxes at 20 metres, 200 metres and one kilometres from the start.

The gun will sound the start of the elite race at 9am. The mass race will follow with groups of four runners starting every five seconds.

The change in course means that this year, instead of starting on the Asian side of the city and finishing on the European side, runners will first cross from Europe to Asia and then back again. With the change to a much more difficult course, organisers don't expect the race records - Daniel Kipkore Kibet's 2:09:44 set in 2019 and Ruth Chepngetich's 2:18:35 from 2018 - to be under threat.

The accompanying shorter races that regularly attract up to 70,000 participants were cancelled this year. 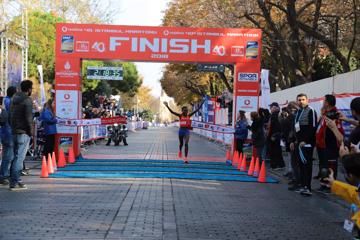 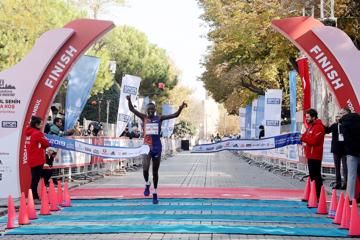