Evelis Aguilar at the Multistars in Florence (© organisers)

Evelis Aguilar from Colombia and Brazil’s Jefferson Santos claimed a double victory for South America at the 30th edition of the Multistars in Florence, the first leg of the IAAF World Combined Events Challenge, on Saturday (29). Aguilar scored 6228 points to cruise to the women’s title while Santos, defending his overnight lead, won with 7728.

Aguilar, the Colombian heptathlon record holder, improved her long jump personal best to 6.46m to take the overall lead with 4552 points after the second day’s first event. Celeste Mucci, a 17-year-old Australian heptathlete of Tuscan origin, also set a personal best with 6.25m to move into second with 4435. Marthe Koala from Burkina Faso, the heptathlon silver medallist at the 2016 African championships, improved her lifetime best to 6.16m to stay in third overall with 4433.

Aguilar notched her second PB of the second day with a 47.02m effort in the javelin to pad her lead to 176 points over Tamara De Sousa, who speared the javelin to 44.30m to up her tally to 5178. Mucci improved her lifetime best to 41.10m to keep her podium position in third place with 5123. Meanwhile, Vana Maksimava moved up from eighth to fourth with 5006 points after a 45.93m throw. Sofia Yfantidou from Greece, winner of the Multistars in 2012, won the javelin event with 55.81m, which moved her from 17th all the way to sixth with 4911, 70 points behind Koala.

In the scuffle for second place, a 2:14.84 run propelled Maksimava from fourth to second with a 5901 tally. The Belarusian overtook de Sousa, who finished third with 5866, ahead of last year’s Multistars winner Vanessa Spinola, also from Brazil, who tallied 5808.

“I came close to my personal best of 6270, It was a good result considering that it was my first competition of the year,” said Aguilar, who added that she’s already looking forward to this summer’s World Championships in London.

Santos, the overnight leader, got off to a good start by improving his personal best in the 110m hurdles by 0.7 to 14.80. But three-time Italian decathlon champion Simone Cairoli, who clocked a 14.61 personal best, overtook the Brazilian by nine points in the overall standings with 4905.

Santos quickly regained the lead after the discus throw, reaching 48.49m, another personal best, to up his total to 5735. Cairoli reached 37.91m, also a personal best while Maksim Andraloits from Belarus, the world U20 silver medallist last year, moved into third after a 44.41m effort.

Santos then won the the pole vault with 4.55m on countback over Frenchman Gael Querin to build a gap of 290 points over Andraloits, who vaulted 4.45m to move ahead of Cairoli, who topped 4.15m.

The Italian then moved back into second after improving his personal best in the javelin to 52.45m for a 6811 tally. Santos meanwhile reached 51.66m to bring his total to 7123 points, 312 ahead of Cairoli.

Querin took command of the 1500m early, pushing the pace in an attempt to clinch a podium position. The Frenchman crossed the finish line in 4:28.35 to overtake Andraloits for third place with 7363. Further back, Santos clocked 4:54.24 to take a comfortable victory with 7728.

“I did not expect to win at all,” admitted Santos, who was lured into athletics at age six by his uncle who worked as a coach. “I really enjoyed my first competition in the IAAF World Challenge.”

Cairoli, who finished second in 4:33.15 to achieve his second podium at the Multistars two years after his third place in 2015.

“It was a good start to my season, I’m pleased,” said Cairoli, who scored 7535. “Competing in the IAAF Challenge and at the European Indoor Championships has given me the chance to gain experience at an international level.” Cairoli, who works part-time at a web agency, said his next major competition with be the European Cup on 1-2 July.

BACK
Pages related to this articleAthletes
Evelis Jazmin AGUILAR 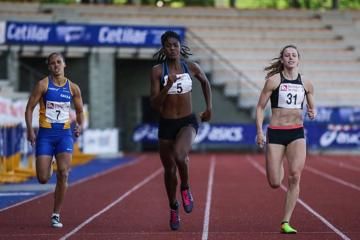 Santos and De Sousa the overnight leaders in ... 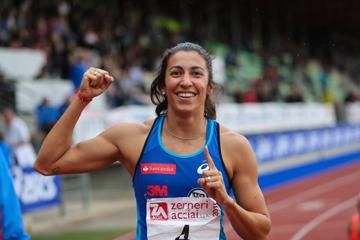