Despite surprisingly warm weather, both course records were broken at the 2013 TUI Marathon Hannover as South Africa’s Lusapho April ran 2:08:32 and Ukraine’s Olena Burkovska crossed the line in 2:27:07 at the IAAF Bronze Label Road Race on Sunday (5).

The men’s race started with a much slower pace than planned. A 10km split of 30:54 indicated a finishing time of just under 2:11, which was well off the target of breaking the course record of 2:08:52 set by Yusuf Songoka in 2010.

It was only after the 15 km mark that the pacemakers were back on schedule on the very flat Hannover course and a pack 16 runners passed the halfway mark in 1:04:48.

At 25km, the 30-year-old April made a serious attack with the help of Kenyan pacemaker Frederick Ngeny, who was originally scheduled only to go until halfway.

“I asked him if he could continue until 30 kilometres, that was very helpful and I thank him for that,” said April.

At 30km, reached in 1:31:17,  the TUI Hannover Marathon winner two yuears ago looked well on course to regain his crown in the German city and  was 39 seconds ahead of a group of four: the Kenyan pair of Wesley Langat and David Kisang, and the Ethiopian duo of  Mekuant Ayenew and Samuel Getachew Demie.

Kenya’s defending champion Joseph Kiptum had already lost contact with the leaders shortly beforehand and later dropped out with a hip problem.

For a few kilometres, Langat tried to close the gap and looked as if he might possibly be able to catch April, but in the later stages of the race the Kenyan faded badly and eventually came home seventh in 2:13:49.

By contrast, the South African continued to run strongly from the 35km point and, despite temperatures of over 20 degrees Celsius, he increased the gap between him and his nearest rivals after running alone for the final 12km.

“I was confident, and I knew I could break the course record,” explained April. “It was the first time in my career that I started a marathon race fully fit and without any problems."

“With a faster pace in the first part of the race and in cooler conditions I could have run under 2:08 today,” he added.

It was also a fine return to form for April, breaking his personal best by 53 seconds in his first Marathon since the disappointment of falling at the London 2012 Olympic Games and eventually limping home in 43rd place.

April can now claim to be South Africa’s number one marathon runner after the fastest time by a runner from that country for four years.

He finished nearly two minutes ahead of Ayenew, who was second in 2:10:05 and his compatriot Getachew Demie took third in 2:12:38.

After a number of unsuccessful attempts by the Marathon Hannover organisers, they finally had runners go under 2:30 in the women’s race as Burkovska improved the former course record of 2:30:17 by more than three minutes with a personal best of 2:27:07.

The 31-year-old Ukrainian, who had a previous best of 2:28:31 from the 2010 Berlin Marathon, passed the halfway mark in 1:13:49 in a group of four with Ethiopia’s Marta Megra and the Kenyan pair of Edinah Kwambai and Agnes Cheserek.

Megra then lost contact and when Burkovska increased the pace shortly before the 30km, which was passed in 1:44:34, the other two could not stay with her either.

“At that point I knew that I would run a course record and a personal best. To break both records, that was my aim coming to Hannover,” said Burkovska.

Edinah Kwambai ran a fine debut in the warm conditions with 2:29:49 and took second place while Megra was third in 2:31:05.

Adding races over shorter distances, a record total of around 16,000 athletes took part in the 2013 TUI Marathon Hannover. 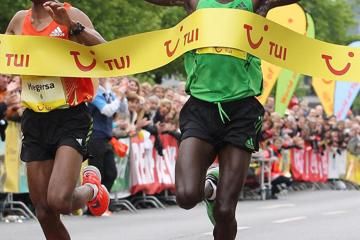 With thrilling finishes, Kiptum and Puchkova ... 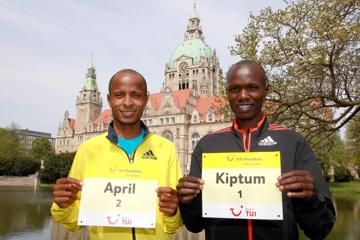