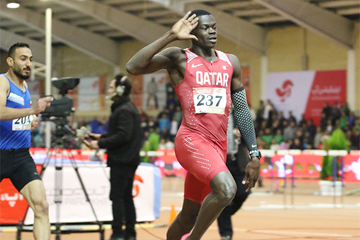 World bronze medallist Abdalelah Haroun successfully defended his 400m title on the second day of the Asian Indoor Championships in Tehran on Friday (2).

The 21-year-old Qatari, who holds the Asian indoor record for the distance, stopped the clock at 46.37 to become the first back-to-back winner of an Asian indoor 400m title.

In a race that was closer than many expected, the world indoor silver medallist finished just 0.29 ahead of Kuwait’s Karam Yousef, who set a national indoor record of 46.66. Haroun’s compatriot Mohamed Nasir Abbas was third in 46.76.

Host nation Iran earned their second gold medal of the championships, thanks to Ali Samari in the men’s shot put. The 25-year-old came within 36 centimetres of the championship record to take gold with a throw of 19.42m, adding the continental indoor title to the outdoor one he won last year. India’s Tejinder Pal Singh took silver with 19.18m.

One day after the championship record was broken in the men’s 60m final, China’s Liang Xiaojing matched that achievement in the women’s equivalent.

The 20-year-old, who holds the Asian U20 record in the event, was a clear winner in 7.20, equalling her personal best and taking 0.07 off the previous championship record set by Kazakhstan’s Viktoriya Zyabkina two years ago.

Zyabkina finished a distant second on this occasion, clocking 7.39.

Svetlana Goldenova led a Kazakh 1-2 in the women’s 400m. The former 100m and 200m specialist, making just her fourth competitive appearance as a 400m runner, won in 53.28 from compatriot Elina Mikhina (53.49) to reverse the finishing order from the recent Kazakh Indoor Championships.