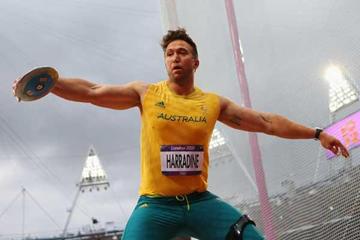 Australian discus thrower Benn Harradine started his 2013 campaign in magnificent fashion by improving his own national record and Oceania Area record to 68.20m in Townsville, Australia, on Friday (10).

Harradine, the 2010 Commonwealth Games champion, also produced the best mark in the world in 2013.

It's the fourth national record and Area record since 2008 for the 30-year-old thrower, who had a previous best of 67.53m set in the same Queensland venue just over 12 months ago.

Harradine, fifth at the 2011 IAAF World Championships and a London 2012 Olympic Games finalist, battled back problems for much of last summer and had surgery at the end of last season.

“It was a good night,” reflected Harradine

“It was a horrible series. When I haven’t been in the circle for very long I am rarely consistent so that was expected but one of the officials in the warm up said that I had been throwing pretty big.

“My first round I think went about 60.90 metres, and then I improved to about 63 metres. I spoke to my coach, who is my Dad, on the fence ahead of my third attempt because I have been having some problems with a nerve in my lower back and thought it was too risky to push it by trying to generate as much power as I can. He said to have one crack because the conditions were great and we couldn't have asked for a better result.

“I honestly nearly started to cry when the read out 68 metres. It was such a massive shock. It goes to show that I have a really good base behind me, and that from here it is just about finding consistency and hopefully improving further.

He is scheduled to next compete in Shanghai at the IAAF Diamond League on Saturday 18 May.

“I’m umming and aahing about Shanghai. I am supposed to throw there, but want to see how my back pulls up and make sure that I get the problem sorted out. If I can come back from this quickly I will look to get another good block of strength training in and just focus on Moscow and not rushing into competitions beforehand,” added Harradine.

“We (Australian discus throwers) are a force to be reckoned with. Julian (Wruck) did fantastically well at Nationals throwing a huge bomb of 66 metres. He’s super consistent and really improving a lot. It will be nice to have two or three of us heading over there in good shape and finishing in finals up there with the big boys.”