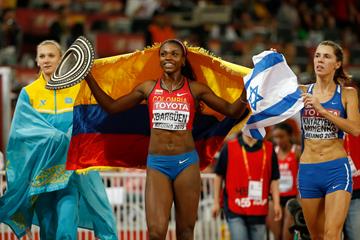 Caterine Ibarguen successfully defended her world title in style, taking the lead in the second round and was never headed after that, improving once more and eventually finishing with a winning distance of 14.90m from her fourth-round effort.

The victory extended her winning streak to 29 competitions, her last defeat coming when she had to settle for second place at the London 2012 Olympics.

However, behind her, the other medals changed hands on several occasions. Even though Ibarguen was in front for the entire competition, she could also never completely relax during an enthralling contest which saw the silver and bronze medallists separated by just one centimetre.

Round one saw Ibarguen, jumping fifth, establish a brief lead with 14.47m before Bulgaria’s Gabriela Petrova, last of the 12 women in the initial rotation, bounded out to 14.52m.

In the second round, Israel’s Hanna Minenko produced a national record of 14.78m, before Ibarguen trumped that with 14.80m and the Colombian never again relinquished the lead.

There was no movement in the top three in the third round but in the fourth, Kazakhstan’s Olympic champion Olga Rypakova started to get energised and she reached 14.59m to push Petrova off the putative podium.

It was also at the end of the fourth round that Ibarguen showed just what a talent she is by going out to a wind-legal season's best of 14.90m, putting a little more space between her and the best of the rest of the world’s triple jumpers.

However, Petrova then showed her competitive mettle by going out to a personal best of 14.66m to regain third place in the penultimate round.

Rypakova, after missing the last World Championships in 2013 due to pregnancy, was not to be denied a medal in the Bird’s Nest stadium after finishing fourth at the 2008 Olympic Games. She then dug deep to produce a season’s best of 14.77m with her last jump to move back into third and Petrova could not respond one more time.

The nerves of Minenko, whose last three attempts were fouls, were visible to see as the judges measured Rypakova’s last leap but she stayed in second place by one centimetre to become her country’s first female World Championships medallist.

Further down the results, much was expected from Ukraine’s 2011 world champion Olga Saladukha and Russia’s world indoor champion Ekaterina Koneva, the latter the only woman beyond 15 metres with a legal wind this year, but neither approached their best form and finished sixth and seventh with 14.41m and 14.37m respectively.