Bett and Jepkosgei a class apart in Bournemouth

Kenyans Stanley Kiprotich Bett and Eddah Jepkosgei were the convincing winners at the Bournemouth Marathon, an IAAF Bronze Label Road Race, on Sunday (2).

In the men's race, a group of four broke clear early on along the picturesque course along England's south coast, including Kenyans Bett and Julius Kiplagat Korir, along with Moroccan Abdelhadi El Mouaziz. The lead pack of four, which also included Japhet Koech of Kenya, were still together as they ran over Bournemouth Pier and through the finish area in Lower Gardens with nine miles remaining.

"The route was good and I felt good the whole way around," said the 30-year-old Bett, who contested the distance for the first time this year.

"There was some strong wind on the shore but I just ran my own race. I enjoyed the Bournemouth sunshine too so I'm very happy."

The women's race was won in 2:40:38 by Eddah Jepkosgei of Kenya, who held off a strong challenge from compatriot Hildah Cheboi, who clocked 2:45:39.

"I liked the route," said Jepkosgei, who won the Edinburgh Marathon in May in 2:39:53. "I was with a group until about 7km and then I went on my own."

Emma Prideaux of Great Britain was a distant third, clocking 3:01:15.

It was the second successive Kenyan double victory at this event. Boaz Kiprono and Joan Kigen cruised to victories one year ago.

A record-breaking 13,000 runners gathered on the Dorset coastline to run in the fourth edition of the two-day Bournemouth Marathon Festival, which included a 5km, 10km, half marathon and junior races in addition to the full marathon.

BACK
Pages related to this articleAthletes
Stanley Bett Kiprotich 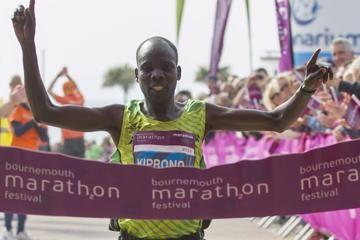 Kiprono and Kigen take the honours at the Bou...