Tirop and Edris take the honours at Boclassic

In the women’s 5km, Tirop, Burka, Etenesh Diro and Stephanie Twell broke away during the second lap. By half way, reached in 8:09, European 5000m bronze medallist Twell had fallen adrift by two seconds.

Tirop and Burka increased their pace, pulling away from Diro on the third lap. Burka tried to resist to Tirop’s fierce pace but could not respond to the Kenyan’s decisive kick on the final lap. Tirop crossed the finish line five seconds ahead of Burka in 15:44, the second-fastest performance in the history of the Boclassic.

Steeplechase specialist Diro, who finished sixth at the London 2012 Olympic Games and fifth at the IAAF World Championships Moscow 2013, took third place in 16:18, 10 seconds ahead of Twell.

“I found totally different conditions compared to the weather in Kenya,” said Tirop. “It was very cold. I did not expect to beat Burka. I have one more cross-country race in San Giorgio su Legnano on 6 January before returning home to prepare for the World Cross Country Championships in Kampala.”

Following a relatively slow first half, Edris and Birech took the initiative and hit the front during the sixth lap with Lahbabi and Longosiwa on their heels. Merga, meanwhile, chose a more conservative tactic and stayed at the back of the lead group in fifth place.

The front group was whittled down to four runners with one lap to go, when Edris, Merga, Longosiwa and Birech broke away from Tadesse and Lahbabi.

The race came down to a final sprint between Edris and three-time winner Merga. Edris launched his kick during the final lap near the railway station but Merga could not respond and, in a repeat of the 2014 edition, settled for second place behind his compatriot.

“I came to Bolzano to win this race for the second time in my career,” said Edris. “It was not an easy race as it was very cold. I was waiting for Merga’s usual final kick but it did not happen, so I launched my attack. My next big goals are the World Cross Country Championships in Kampala and the 5000m at the World Championships in London, but first I will run in San Giorgio su Legnano for the Campaccio.” 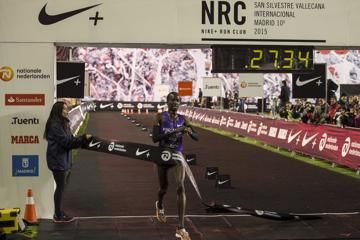 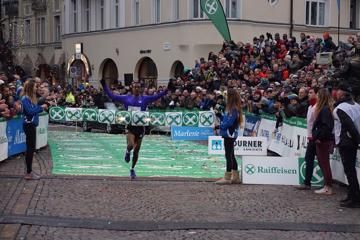