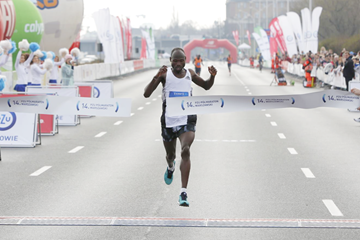 Aberu dominated the women's race, running at the head of the pack from the 10km point on en route to a 2:24:30 victory. The run knocked five seconds from the 35-year-old's previous lifetime best set at the Valencia Marathon last December.

Running alongside Kenyan Lydia Cheromei through the opening five kilometres (17:36), she pulled away shortly thereafter, building a 13-second lead by the 10km point (34:44). She increased her lead over the Kenyan to 47 seconds by 15 kilometres and to more than a minute-and-a-half by 20.

While Aberu forged on alone, Cheromei dropped back and out of contention by 30km. By that point, Aberu was already more than two minutes clear of the field and eventually won the race by more than three minutes.

Further back, Chinese Li Zhixuan and He Yinli finished second and third, clocking 2:27:56 and 2:29:14, respectively.

Conversely, the men's race came down to the wire, with Shambel out-sprinting Kenyan Edwin Kibet Koech in the waning stages to pull off the narrow win, with both men clocking 2:10:28.

Thirteen men were in contention at 10km (31:27), a pack reduced to ten at 30km covered in 1:33:22, with Kibet running at the front. Tufa and Marius Kimutai brought the lead pack, now down to five, through 40km in 2:04:10, with Koech a second behind and Kenyan Michael Njenga Kunyuga and Ethiopian Gebretsadik Abraha shadowing the trio another second back.

Gilbert Masai and Gladys Kipkoech pulled away in the final five kilometres to win the PZU Warsaw Half Marathon, securing a Kenyan double at the IAAF Silver Label road race on Sunday (31).

A lead pack of seven had emerged within the first five kilometres, which was covered in 14:27. But at 10 kilometres, reached in 28:42, the pack had been whittled down to four: Masai, Silas Kiptoo, Peter Kirui and Ethiopia’s Getaye Gelaw.

Masai started to gradually open a gap on his opponents in the second half. He had a four-second lead over Kirui at 15 kilometres (43:15) with Kiptoo a further seven seconds in arrears.

The positions remained the same until the end but the gaps grew. Masai eventually won in 1:01:43, leading a Kenyan sweep with Kirui taking second place in 1:01:57 and Kiptoo completing the podium in 1:02:03.

In the women’s race, Abebech Mulugeta ran alongside Kipkoech and Tabitha Wambui through the first five kilometres in a swift 15:50, but the pace soon settled with the Kenyan duo reaching 10 kilometres in 32:24 and Mulugeta already starting to pay for her early efforts.

Kipkoech and Wambui were still together at 15 kilometres (49:35) but Kipkoech slowly pulled ahead of her compatriot soon after.

The 22-year-old went on to win in 1:10:19, just six seconds shy of the PB she set on her debut at the distance last year. Wambui took second place in 1:11:07 while Mulugeta prevented another Kenyan podium sweep, finishing third in 1:12:19.