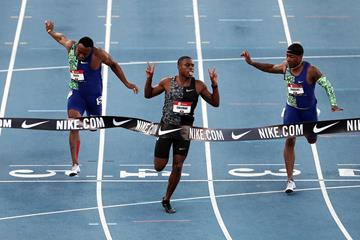 Coleman and Crouser dominate at second day at US Championships

World leaders Christian Coleman and Ryan Crouser reasserted their stature with dominant victories on Friday (27) at the USA Championships at Des Moines, Iowa.

Unheralded sprinter Teahna Daniels scored an upset in the women’s 100m. Sha’Carri Richardson, who set a world U20 record of 10.75 at last month’s NCAA Championships, finished last and did not make the team for the IAAF World Athletics Championships Doha 2019.

The 100m national title was the first for Coleman, 23, the world indoor champion and world indoor record-holder. He was second in the 100m in 2017 behind Justin Gatlin, the eventual world champion. Gatlin qualified for the final but, with a bye to the World Championships, pulled out.

“It’s just amazing. A long time coming,” said Coleman, whose 9.81 in the Prefontaine Classic at Stanford is the fastest time in the world this year.

Crouser, the Olympic champion, climbed from third to first in the shot put with a fifth-round distance of 22.62m. It was his seventh meet of 22 metres this season and gave him his third USA title.

Joe Kovacs was second at 22.31m and Darrell Hill third at 22.11m to complete the trio going to Doha.

“This one was special or me,” Crouser said. “I had a couple of rough weeks of training.”

Olympic 4x100m gold medallist English Gardner was second in 11.25. Morolake Akinosun, one year removed from achilles surgery, was third in 11.28.

World champion Tori Bowie, with a bye to the World Championships, did not enter the 100m.

Donald Scott repeated as triple jump champion with a wind-aided triple jump of 17.74m in the first round. Will Claye was second with 17.70m and was credited with a stadium record with a wind-legal 17.68m (1.8m/s). Omar Craddock was third with 17.55m.

Christian Taylor, with a bye to Doha, jogged down the runway and intentionally fouled. USA rules require him to compete at the National Championships to be eligible for the team.

“I know that it was going to take a toll, and I thought it’s better that I stay healthy and really hit it hard on the back end of the season,” Taylor said.

Conor McCullough won his first title in the hammer, setting a facility record with a PB of 78.14m to move to eighth on the US all-time list. His distance was the longest by a US thrower since 2012. The 28-year-old was the 2010 world U20 champion and is the son of Conor McCullough, who represented Ireland in the hammer at the 1984 and 1988 Olympics.

Allyson Felix, eight months after childbirth, was third in her 400m semifinal in 51.45 to make Saturday’s final. The top time was 50.20 by defending champion Shakima Wimbley.

“I wish I had more races. But I'm just trying to put myself in a position to give myself a shot,” said Felix, 33, who has nine medals from the Olympics and 16 from World Championships.

Among others advancing to finals were Olympic champion Matthew Centrowitz in the 1500m, bronze medalist Clayton Murphy (1:45.24) in the men’s 800m, Ajee Wilson in the women’s 800m, Rai Benjamin in the 400m hurdles, world record-holder Kendra Harrison in the 100m hurdles and world champion Emma Coburn in the steeplechase.