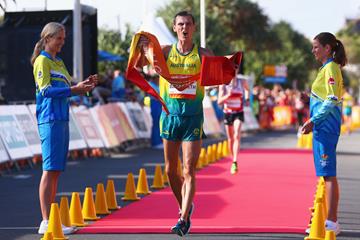 A golden double for Australia in the race walks and a golden finish for chief rival England highlighted the first day of athletics at the Gold Coast Commonwealth Games.

After being left off the program at the previous edition of the Games in Glasgow four years ago, race walking made its return on the Gold Coast. No-one was more pleased to see it back than the hosts, who won both gold medals on an eye-catching course on the ocean front near the famous Currumbin Bird Sanctuary.

The favourite, Dane Bird-Smith, won the men’s 20km after a see-saw battle with Tom Bosworth over the closing stages while Jemima Montag, a bit of a bolter and walking only her third time at the distance, won the women’s 20km.

But if England was eclipsed in the bright sunshine at Currumbin, the empire struck back when the full program commenced at Carrara Stadium in the afternoon. Topping the bill was hammer thrower Nick Miller who, after teetering on the brink of elimination with two fouls, went beyond the 80-metre mark for the first time in winning the gold medal in the hammer throw.

The day's best performance came in the qualifying round of the men's shot put with Tom Walsh reaching a massive 22.45m Games record.

Bird-Smith and Montag’s morning at the beach

Dane Bird-Smith doesn’t mind a walk along the sea-front. Two years ago in Rio, he took an Olympic bronze medal in the 20km at the Rio Olympics where the walks were held at the seaside village of Pontal. And an hour before the start of the Commonwealth event there were as many surfers out trying to catch a break off the point as there were spectators at the walk.

That soon changed as several thousand poured into the venue, drawn by the hope of seeing local athlete Bird-Smith take on what was a world-class field. Besides Bird-Smith there were several others who have featured in the top 10 at Rio, London 2017, or both. South Africa’s Lebogang Shange was fourth in the London 20k. Bosworth and Evan Dunfee (CAN) were sixth and tenth, respectively, in Rio. Canada’s Benjamin Thorpe took bronze in the 20km at Beijing 2015. New Zealand’s Quentin Rew is in the top bracket at both 20 and 50km.

With Sally Pearson out of the Games due to injury, Bird-Smith was one of several Gold Coast locals looked on to step up. He took off from the start like a man on a mission, driving a pack which was gradually reduced to four at 10km with the Australian, Bosworth, Kenya’s Samuel Gathimba and Benjamin Thorne of Canada.

The time then was 39:57. Just before that, Bosworth had surged to the lead for the first time. As the race progressed, a pattern emerged, the Englishman pushing hard up to the northern end of the course, Bird-Smith surging towards the south. Over the last four kilometres it was down to a two-man duel. Bosworth broke the pattern by pushing into the lead the second-last time they turned at the southern end, but it was Bird-Smith who made the decisive move there on the last lap.

Bird-Smith crossed the line in 1:19:28, 28 seconds under the previous Games record set by Nathan Deakes in Melbourne in 2006. Bosworth was 10 seconds back at the line, with Gathimba in third place taking Kenya’s second bronze medal in Commonwealth race walking (the previous one by David Kimutai in 2002).

Fittingly, it was Deakes who did the presentations for both walks.

The women’s race was equally dramatic, largely down to the disqualification of Claire Tallent just after she had taken the lead from Montag. The 20-year-old Montag had led from the start, first with training partner Alana Barber of New Zealand, then with Tallent, then on her own. When Tallent caught her at 15km, however, it looked like the more experienced Australian would prevail.

But Tallent had already picked up two cautions and was clearly working hard. She saw the dreaded third red with just less than three kilometres to go and collapsed to the road, distraught.

Montag won in 1:32:50 from Barber and Beth Davies of Wales. It was just the third 20km she has walked, from her debut in Melbourne late last year, to the selection trial and now the Gold Coast, where she became a most unlikely Commonwealth champion.

Favourite Miller does it the hard way

Nick Miller turned out an almost as unlikely a Commonwealth champion as Montag. Not for form – he led the Commonwealth at 78.29m coming into the meeting – but after his first two throws he looked on his way out. But a clutch throw of 76.48m put the Englishman into the lead and he increased that to a massive 80.26m in the fourth round. That was a Games and British national record and he followed it with a 79.75m to show it was no fluke.

Australia’s rising young thrower Matty Denny was also in trouble after two fouls. His response was not quite as emphatic as Miller’s, but a 74.88m took him into second place and he stayed there to take the silver medal.

Scotland’s Mark Dry, a bronze medallist four years ago, got out to 73.12m in the final round to jump into the same position again.

Five laps into the 5000m a time not much under 15 minutes was looking on the cards. But the last five laps of the race – run in 5:03 – was another matter. Joshua Cheptegei, dramatically run down in the final lap at last year’s World Cross Country Championships, was probably under four minutes for the final mile as he held off Canada’s Mohammed Ahmed to take the gold medal, 13:50.83 to 13:52.78.

Cheptegei succeeds Moses Kipsiro, winner of the distance double in Delhi eight years ago and of the 10,000m in Glasgow, as an irritating thorn in the side of Kenyan ambitions.

The 2011 world champion Yohan Blake was fastest in the semis of the men’s 100m, taking out the first of the three in 10.06. But he will face a tough field in the final as Adam Gemili, just 0.05 behind, Kemar Hyman and Akani Simbine were all close to him on times.

It was just as close in the women’s semis with England’s Asha Philip winning the first in 11.21. Michell-Lee Ahye of Trinidad taking the second in 11.25 and Christania Williams the third in 11.22.

Both finals will be run at the end of day two.