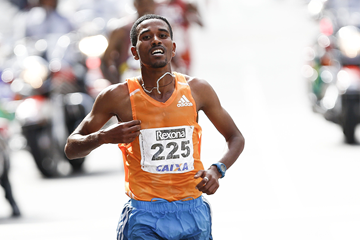 Fikadu and Mihretu the winners at Langueux 10km

As is often the case in Langueux, the early pace was aggressive and about 20 runners soon separated themselves from the rest of the field. But the rhythm soon slowed down half way through the first of three 3.2km laps, reached in 9:15.

The lead pack passed through the halfway point in 14:22, well outside the pace required to challenge the course record of 27:46 set by Atsedu Tsegay in 2011.

Only Ethiopia’s Fikadu Haftu tried to push the pace, but his move wasn’t strong enough to break clear as Dawit Fikadu controlled his main rivals.

At the bell and with about 3.5km remaining, there were still eight runners in contention for the victory. With 800 metres to go, only Ambesa Tesfaye, Fikadu Haftu, Ayenu Yismaw and Muhajr Sraj managed to stay with Fikadu, who began to make a decisive move. He saved his biggest surge for the final kilometre, which he covered in 2:34 on his way to winning in 28:43.

Although he hadn’t showed good form so far this season with two 10km runs of 29:57 and 29:34, Fikadu, who finished third in Langueux in 2014, said he specifically trained for this event.

Ethiopia’s Tesfay finished second in 28:44 while compatriot Haftu took third place in 28:46. James Theuri was the first Frenchman to cross the line in 29:42 as 18 men finished within 30 minutes.

Meskerem Amare was forced to withdraw from the women’s race and couldn’t defend her title. In her absence, the women’s race set off at a fierce pace with the first kilometre being covered within three minutes.

With no one willing to take the lead, the pace soon faded. A group of six women including Ethiopia’s Birhane Mihretu and Belanesh Beyene, Kenyan pair Susan Kipsang Jeptoo and Leonidah Mosop, Poland's Karolina Nadolska and Frenchwoman Christelle Daunay went through the 5km checkpoint in 16:10.

Daunay, who was the runner-up last year, started to struggle after seven kilometres and soon drifted back.

Although she wasn’t considered to be among the pre-race favourites, Ethiopia’s Mihretu managed to kick on in the last kilometre. She forged ahead to open a small gap over her opponents and held on to take the victory in her first international 10km.

Before the Corrida de Langueux, Mihretu’s only known performances were a fourth-place finish over 5km in Addis Ababa and a 15:45 5km victory in Casablanca.

Daunay, the 2014 European marathon champion, eventually wound up sixth in 32:53. She will enter a half marathon next weekend as part of her preparations for a marathon in the autumn.