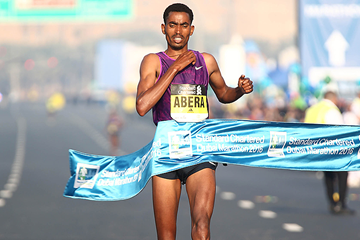 There seems to be an unwritten rule of the Standard Chartered Dubai Marathon that it must be won by Ethiopians and that the men’s winner must be either a debutant or an underdog. At the IAAF Gold Label Road Race on Friday (22), everything went according to those rules.

There were 17 men on the start line with PBs faster than Tesfaye Abera. By the end of the race, the 23-year-old Ethiopian had the fastest PB of the entire field after winning in 2:04:24, just one second shy of the course record set by Ayele Abshero in 2012.

The women’s race also produced the second-fastest winning time in the history of the Dubai Marathon. Tirfi Tsegaye, the winner in 2013, regained her title with a PB of 2:19:41.

With IAAF President Sebastian Coe in attendance as the official starter, the two races played out quite differently.

In the men’s race, a large group of athletes passed through 5km in 14:35 and 10km in 29:14 with the top 25 athletes all within a few seconds of each other. Pace maker Amos Kipruto took the field through 15km in 43:50, a few seconds down on the 4:42-per-mile pace needed for a world record, but 20 seconds quicker than Dennis Kimetto achieved for the same checkpoint when setting the world record of 2:02:57 in 2014.

In simple terms, a world record was not out of the question.

The attrition of the field continued as the race went on, but by the half-way point, reached in 1:01:36, there were still 16 men in the lead pack. Behind the quartet of pace makers, Sisay Lemma, defending champion Lemi Berhanu, 2014 winner Tsegaye Mekonnen, Mule Wasihun, and Abera were among the 10 Ethiopians left in contention.

But the lead pack was reduced by five athletes as they passed 25km in 1:12:49, at which point they were right on even world record pace and still 19 seconds ahead of where Kimetto was at the equivalent mark.

Lemma looked the most comfortable at this point and started to put in a few surges. By 30km Abera lost a few seconds on the lead pack, which was now down to six, but he regained contact and they were all still operating at world record pace.

At the 30km checkpoint, the clock read 1:27:20 – the fastest 30km clocking in history. Lemma and pacemakers Kipruto and Edwin Koech were in the lead at that point, meaning they will be credited with the world record (subject to the usual ratification procedures).

But after the pace makers dropped out, there was a slight drop in speed. Mule Wasihun was the next to drift off, leaving just four men – Berhanu, Lemma, Mekonnen and Abera – at the front. Soon after passing 35km in 1:42:27, Abera decided it was his turn to lead.

The tall Ethiopian still had his three compatriots for company as they went through 40km in 1:58:08. A couple of minutes later, Berhanu tried to make a break. Lemma and Mekonnen were unable to respond, but Abera followed Berhanu a few strides behind.

With about 600 metres left and the finish line in sight, Berhanu still had a lead of a few metres. But with little more than a minute of running left, Abera kicked and went past Berhanu, opening up a comfortable gap.

Abera crossed the finish line in 2:04:24, taking five minutes and 22 seconds off the PB he set when winning the 2015 Mumbai Marathon on his debut at the distance, but missing out on the course record by just one second.

“My aim was just to beat my personal best,” said Abera, who now moves to ninth on the world all-time list. “To get so close to the course record is a great feeling but my main concern was to improve my best and try to win the race.”

Berhanu held on for second place and was rewarded with a PB of 2:04:33. Mekonnen, who up until now had struggled to recapture the kind of form that took him to a world junior best of 2:04:32 when winning in 2014, finished third in 2:04:46. It was just the fifth marathon in history in which the top three men had finished within 2:05.

Lemma, who finished fifth in Dubai last year before going on to win in Vienna and Frankfurt, set a PB of 2:05:16 in fourth place. Wasihun, contesting just his second marathon to date, was fifth in a PB of 2:05:44 as Ethiopians filled the top six places.

While the winner of the men’s race was relatively unheralded, the women’s winner came into the race with years of experience.

Tsegaye’s first marathon victory came in her debut at the distance back in 2008 when she won in Porto. Since then, she has gone on to win in Shanghai in 2010, Paris in 2012, Dubai in 2013, and in Tokyo and Berlin in 2014. She also had the fastest PB of the field heading into this race, making her one of the red-hot favourites.

She was among the 18 runners to pass through the 10km mark in 33:25. Five kilometres later, that group was whittled down to 12 as Tsegaye and compatriots Mestawet Tufa, Meselech Melkamu, 2010 Dubai winner Mamitu Daska and marathon debutante Amane Beriso led the group through 15km in 50:05.

Soon after, the lead pack was reduced to seven Ethiopians: Tsegaye, Tufa, Beriso, Melkamu, 2014 Dubai winner Mulu Seboka, and marathon debutantes Sutume Asefa and Hiwot Gebrekidan. Tucked in behind a quartet of male pace makers, the leading women went through 25km in 1:23:09.

The pace continued to increase and by 35km it was just Tsegaye and Beriso left out in front with the pace makers. Another five kilometres later, Tsegaye had shaken off the last of her opponents and had just a couple of pace makers for company.

With 35km reached in 1:55:49, Tsegaye was well on course for a sub-2:20 finish and was not far off the pace required for a course record.

The lack of opposition in the final few miles meant that Tsegaye’s pace dropped slightly. Nevertheless, she held on to finish in 2:19:41, taking 37 seconds off her PB to move to equal 12th on the world all-time list. Of her 19 marathons to date, Tsegaye has now made it on to the podium in 14 of those.

“Dubai is like a second home to me now,” said Tsegaye after receiving her trophy from IAAF President Sebastian Coe. “I love running here.”

Beriso, winner of the Rome-Ostia and Warsaw half marathons last year, finished second in 2:20:48, the fifth-fastest marathon debut in history. Her time would have been good enough to win all but three of the Dubai Marathons to date.