Even if they did not reach all their goals on Friday (8) night, Armand Duplantis and Grant Holloway remain the key figures of the NCAA Indoor Track and Field Championships at Birmingham, Alabama, USA.

Competing for Louisiana State University, the 19-year-old Duplantis (pole vault world rank: 2) claimed his first NCAA title, adding that to the senior European and IAAF world U20 and U18 gold medals he's already collected. He came from behind to win with a clearance of 5.83m. He missed three times in a bid to break his two-week-old collegiate record of 5.94m.

“Seeing Rayvon get the win in the long jump, that hyped me up, it motivated me," Duplantis said.

If Holloway can win a sprint/hurdles double, he would be only the third ever to do so in the indoor NCAAs after Willie Gault (1983) and Terrence Trammell (2000).

Holloway's University of Florida teammate, former world U18 100 and 200m champion Hakim Sani Brown, was the next fastest, clocking a personal best of 6.54.

Other women’s winners were Michelle Atherley (heptathlon world rank: 56) in the pentathlon with a 4577 tally, Jasmyn Steels (long jump world rank: 217) in the long jump at 6.46m and Samantha Noenning (shot put world rank: 49) in the shot put with 17.91m. 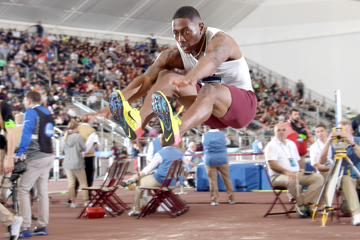 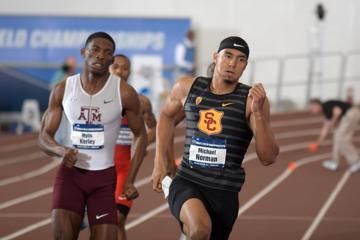