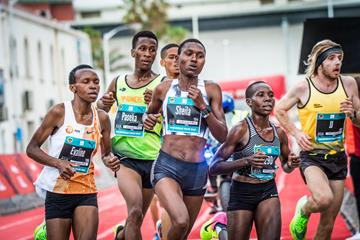 World leader Sheila Chepkirui lived up to her billing as race favourite for the FNB Durban 10K CITYSURFRUN on Sunday (13), taking four seconds off the African all-comers’ record to win the IAAF Bronze Label road race in 30:55.

One week after finishing fifth in the marathon at the IAAF World Athletics Championships Doha 2019, Stephen Mokoka landed victory in the men’s race in front of a home crowd, clocking 28:12.

The gusting winds didn’t deter Chepkirui, who earlier this year moved to second on the world all-time list for 10km with her 29:57 victory in Prague.

Chepkirui and compatriots Evaline Chirchir and Beatrice Mutai went straight to the front of the race to dictate the pace. Ethiopia’s Tadu Nare went with the Kenyan trio, but was only able to stick with them for three kilometres

Chepkirui stayed behind Mutai and Chirchir for most of the race, passing through half way in 15:26, and first made her presence felt just after seven kilometres, moving between Chirchir and Mutai.

Chepkirui threw in another surge at about 8.5km and Mutai started to fade, but it was only in the final 500 metres that Chepkirui was able to edge ahead of Chirchir, eventually crossing the line in 30:55 to finish two seconds ahead of Chirchir. Mutai was third in 31:01.

“I am really happy with my performance, especially the fast time, as this is my first road race in South Africa,” said Chepkirui. “I usually stay at the back in the beginning and then make my move closer to the race finish.”

In the men’s race, Uganda’s Stephen Kissa – who competed in the 5000m at the recent World Championships in Doha – did much of the work to set the pace in the early stages of the race, leading a group of about 20 athletes through 5km in 14:21.

With about two kilometres to go, South Africa’s Precious Mashele threw in a surge and split the field that had been whittled down to 10. As the lead pack reached the promenade, Mokoka took control and strung the field out even further. Only Mashele, Kissa and Kenya’s Kevin Kibet went with the charge, but Mokoka put in another surge to drop Mashele.

“I am really happy with the win,” said Mokoka. “Not just the win and being first South African, but also my fastest time in South Africa. Previously it was 28:18, so that shows that things are coming together for me.”

The pace of the men’s race was aggressive from the outset. “It was really fast. I decided to let it go with some others French runners,” said Florian Carvalho afterwards. The Frenchman, third two years ago, then bridged the gap at about two kilometres into the race.

A group of 10 runners hit the 5km mark in 14:25, but the pace was irregular. Carvalho decided to take the lead after 10km, reached in 29:05, with eight other runners still in contention.

After the 15km mark, hit in 43:58, Enos Kales, who entered the race at last minute, made a big move. His compatriots Shewalem Yergalem and Joseph Mbatha as well as Ethiopia’s Getinet Mele Gedamu were able to stick to his stride as the French trio Carvalho, Michael Gras, and Nicolas Navarro struggled to sustain the pace.

In the closing stages, Yergalem and Mbatah couldn’t handle the pace and Kales broke off. At about the same time, Carvalho and Gras drew level with the chasers.

Kales held on for the win and crossed the line in 58:28, following a 14:30 last 5km section, as Carvalho finished second in 58:56, 16 seconds outside his time from 2017. “It bodes well for the Valencia Marathon, which is my main goal,” said Carvalho.

Gras managed to hold off Yergalem and Mbatha to round the podium in a personal best of 59:02.

In contrast to the men’s race, the women’s race set out at a relatively slow pace. Nine runners hit the 5km mark in 17:52, suggesting a possible finish time of 1:11:30, far from the results of past editions. The group, spearheaded by Kenya’s Naomi Jebet, ramped up the tempo during the next 5km section to reach the 10km checkpoint in 35:06.

With five kilometres to go (52:30 at 15km), there were still eight contenders for the win, including Jebet, Adawork Aberta, Chaltu Dida as well as the French pair Liv Westphal and Samira Mezeghrane.

Jebet made a big surge after 15km and only Dida and Aberta were able to follow her. Aberta then struggled to sustain the pace with two kilometres remaining, and Jebet sealed the win in 1:08:51, following a 16:21 5km section, the fastest of the race, six seconds ahead of Dida. Aberta finished third, 33 seconds adrift of the winner.

Both men’s and women’s course records were broken at the Changzhou West Taihu Lake Half Marathon on Sunday (13), as Taye Girma retained his title and fellow Ethiopian Fantu Jimma claimed victory in the women’s race at the IAAF Bronze Label event.

The top three finishers all beat the course record of 1:03:04 set last year by Girma in the south-eastern Chinese city. The 23-year-old emerged triumphant from a three-man battle and created a decisive lead in the last 400 metres to break the tape in 1:02:45.

Abdi Fufa, 24, lagged one second behind to take second place in 1:02:46, trimming 11 seconds off his personal best set three years ago in Barcelona. Asefa Tefera, the fastest entrant on paper with a PB of 1:00:07, finished third in 1:02:49 to complete the podium sweep for Ethiopia.

A group of four runners built an early lead soon after the gun. After passing the seven-kilometre mark, Girma launched his first charge, but failed to break clear as he was soon caught by Tefera and Fufa.

The trio remained together thereafter until Girma charged once again with some 400 metres to go. Fufa gave his best to go after Girma. He outraced Tefera in the home stretch but failed to turn the tables against the in-form Girma.

The women’s race also saw an Ethiopian podium sweep. It’s the first time in the six-year history of the event that all podium places in both races were claimed by Ethiopian athletes.

Zinash Mekonnen, who stayed in the leading pack for most of the race but had to quit the title contest after 18km, settled for third place in 1:12:07, which is more than three minutes shy of her life-time best mark of 1:08:30 achieved last March in Valencia.