In the land of combined events, this was exactly what was needed to bring the home crowd roaring to life. On the second full day of action at the European Championships in Berlin on Wednesday (8), Germany’s Arthur Abele delivered the hosts their first gold medal and caused the old Olympic Stadium to shake at its seams.

It was the first ever major senior outdoor championship medal for the 32-year-old, and it arrived off the back of two near-flawless days of competition, which also formed part of the IAAF Combined Events Challenge.

After favourite Kevin Mayer blundered out of the competition after three fouls in the long jump on Tuesday, the path was cleared for Abele and the German duly made no mistake.

Overnight, he put himself second on 4285 points, 95 points behind Britain’s Tim Duckworth, but given his superior ability in the final five events that was never likely to be a big task to overcome on day two.

Abele closed the gap with a 13.94 clocking in the 110m hurdles (to Duckworth’s 14.55), and a 45.42m throw in the discus netted him 775 points to put him in pole position with three events to go. Duckworth moved back to the lead with a 5.10m clearance in the pole vault, well above the best of 4.60m cleared by Abele, who surrendered second to Ilya Shkurenyov after the neutral athlete cleared 5.30m.

With Estonia’s Maicel Uibo withdrawing before the javelin at a time when he was in fifth position, the medals became even more open to outsiders as the final events loomed.

During the evening session, the crowd truly came to life, throwing their weight and considerable vocal support behind every one of Abele’s throws in the javelin. His opener of 68.10m proved his best and pulled him 102 points clear of Duckworth and 107 clear of Shkurenyov.

Given his vastly superior 1500m best of 4:15.35, the final event was always likely to prove an elongated lap of honour for the German, though on fatigued legs he needed to throw everything into it as he faded badly down the home straight, reaching the finish eighth fastest in 4:30.84 to record a winning tally of 8431.

“Finally a medal,” said Abele. “I had so many injuries this year, I was not sure whether I could have an athletics season or not. This title is the absolute highlight. Big thanks to the masses here in the stadium who drove me, who powered me. They gave me the strength to achieve this.”

Rising star Niklas Kaul of Germany set a PB in fourth overall with 8220, while Duckworth could only again rue his 1500m ability after slipping from second to fifth after clocking 4:58.28 for 1500m.

It proved a decent night for German athletes in the field events, too, where Fabian Heinle won a surprise long jump silver and Christina Schwanitz took the same hardware home in the shot put.

Schwanitz was inevitably disappointed with her runner-up position, the defending European champion unable to produce anything close to her season’s best of 20.06m. Instead she could only watch as Poland’s Paulina Guba sprung a surprise, taking gold with a best of 19.33m in the final round of the competition.

In the first round it appeared Schwanitz had the competition at her mercy, the German opening with 19.19m to seize control. It was a throw no one came close to in the four rounds that followed, though Guba’s throw of 19.02m in the fifth round signalled what could be to come.

In the final round the Pole launched a whopper of 19.33m to steal the lead from Schwanitz, and the German could offer no response, her 18.98m final throw leaving her with silver. Belarus’s Aliona Dubitskaya took bronze with 18.81m, while Poland’s Klaudia Kardasz set a national U23 record of 18.48m in fourth.

“I am shocked,” said Guba. “I am sorry if I made the local fans upset but I surprised even myself.”

The men’s long jump saw the favourite live up to his billing, Greece’s Miltiadis Tentoglou producing a season’s best of 8.25m when it mattered most to take gold. For much of the competition, it appeared as if Germany’s Fabian Heinle was set for a shock win, the 24-year-old adding nine centimetres to his season’s best with an 8.13m leap in round two to take the lead.

Tentoglou opened with 7.96m and improved to 8.00m in the third round before finding his magic leap in round five, his 8.25m enough to give him gold by 12 centimetres ahead of Heinle, who took silver on countback from Ukraine’s Serhii Nykyforov, both with a best of 8.13m.

“I am so over the moon, the audience made me a silver medal winner,” said Heinle. “Coming to Berlin, I had a dream to fight for a medal and little hope that I can make it.”

After a sub-par opening, Lithuania’s world champion Andrius Gudzius seized command in the third round with a decent effort of 67.19m, only to see the lead swiftly grabbed by chief rival Daniel Stahl in the fourth round, the Swede throwing 68.23m.

Discus winner Andrius Gudzius at the European Championships in Berlin

Stahl could manage no better on his final two throws, which left him enduring a nervous wait as Gudzius entered the circle for the final time. The Lithuanian somehow produced an inspired effort, his throw of 68.46m delivering him his first European senior title.

Stahl took second with 68.23m, while Austria’s Lukas Weisshaidinger took bronze with a best of 65.14m. Meanwhile at what will be his final championships, German hero Robert Harting signed off with a sixth-place finish via his best throw of 64.33m.

“Everything no longer feels light and easy, but just heavy,” said the three-time world champion. “But this was a beautiful evening; it could not have been more beautiful.”

A piece of history for Salpeter

The women’s 10,000m delivered Israel its first ever track gold medal at the European Championships, Lonah Chemtai Salpeter proving too strong for her rivals in a race that turned into a slog.

With temperatures soaring into the high 30s Celsius during the day in Berlin, the Olympic Stadium was akin to a greenhouse come race time, and it was Salpeter who coped best.

She cut out much of the early running along with Turkey’s Yasemin Can, the pair passing half way in 15:51.76. Through the second half, Salpeter kept applying pressure at the front, her 3:07.91 seventh kilometre putting all those behind into the red zone.

Lonah Chemtai Salpeter leads the 10,000m at the European Championships in Berlin

In the end, all but one rival fell away, with Susan Krumins of the Netherlands giving dour chase through the final few laps but unable to close the 40-metre deficit. Salpeter came home in 31:43.29 to take gold, with Krumins second in 31:52.55 and Sweden’s Meraf Bahta taking bronze in 32:19.34.

“I made the move and paced harder because I knew that if I do not do it, they would leave me on the last kilometre,” said Salpeter. “This medal is an honour for my flag, for my country and for me, for all the hard work I did for it.”

Elsewhere there was a shock in the women’s high jump qualification where Italy’s Elena Vallortigara, the chief threat to Mariya Lasitskene, was eliminated after three failures at 1.90m.

The men’s 400m semi-finals produced an ominous-looking effort from Britain’s Matthew Hudson-Smith, who was shutting down a long way from home en route to a 44.76 clocking. Norway’s Karsten Warholm also booked his place in the final by winning in 44.91, though he will first have to navigate Thursday night’s 400m hurdles final.

Earlier in the day, the men’s 1500m heats provided their typical dose of drama, reigning champion Filip Ingebrigtsen falling with 700 metres remaining in a pile-up of athletes before clawing his way back into an automatic qualification spot, finishing third in the second heat to join brothers Henrik and Jakob in Friday’s final.

BACK
Pages related to this articleAthletes
Arthur Abele 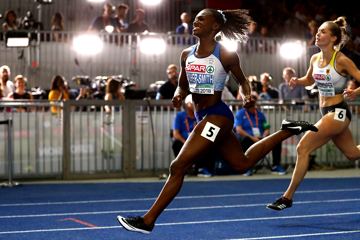