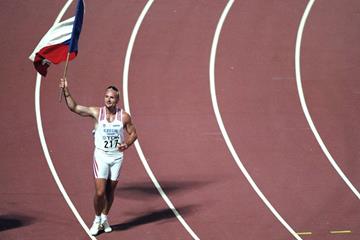 Tomas Dvorak of the Czech Republic captured the gold medal, becoming the third-best performer of all time after Dan O'Brien and Daley Thompson.

Dvorak missed the world record by just 54 points. He led for most of the 1500m, but was passed by USA's Steve Fritz and Germany's Frank Busemann just before the last lap, finishing third in 4:35.40.

The Czech recorded six personal bests during the competition.

Finland's Eduard Hamalainen missed his personal best by only five points, but he broke the national record for his new country with 8730, finishing the 1500m in 4:37.10.

Fifth place in the competition was taken by Uzbekistan's Ramil Ganiyev with 8445, a national record. Ganiyev bettered his previous personal best by 127 points. Estonia's Erki Nool was sixth, scoring 8413.