Running in humid and raining conditions, Mo Farah and Brigid Kosgei produced convincing victories at the 41st edition of the Bank of America Chicago Marathon, an IAAF Gold Label road race, on Sunday (7).

Farah broke from Ethiopian Mosinet Geremew as the pair approached the final turn en route to a 2:05:11 performance to smash the European record and take his first marathon victory by 13 seconds. Kosgei, the runner-up last year, was even more dominant, running much of the waning stages alone before crossing the line in a PB of 2:18:35, moving to seventh on the world all-time list and fourth on the 2018 world list.

"It's amazing to cross the line first," said Farah, whose career accolades include back-to-back Olympic 5000m and 10,000m victories, along with three world titles over both distances. His impressive run also also smashed the European record of 2:05:48 set by Sondre Moen at the Fukuoka Marathon last December and Farah's previous career best of 2:06:21 the Briton set at the London Marathon in April.

With pacemakers returning to the race after a three-year hiatus, the leaders opened at a steady clip, running through the first five kilometres in 14:52 and 10 kilometres in 30:10. By then 14 runners made up the lead pack, with Abel Kirui and Geoffrey Kirui tucked in closest behind the two pacesetters. The pack was reduced by just one at the half, covered in 1:03:03 when the rains that left a sheen of water on the streets earlier in the day returning, albeit briefly.

After a scorching 4:29 19th mile, the race finally began breaking up just beyond the 30-kilometre point, with nine men left in the chase: both Kiruis and Kenyan compatriots Bedan Karoki and Kenneth Kipkemoi; Ethiopians Geremew and Birhanu Legese; Farah; defending champion Galen Rupp; and Suguru Osako of Japan.

Abel Kirui was next to drop, falling back at the 20-mile marker. Kipkemoi decided to up the pace, a move that first dropped Karoki, then Legese and finally Rupp, leaving five in contention: Kipkemoi, Geoffrey Kirui, Farah, Osako and Geremew, with the Briton running comfortably at the front. Then, with 1:55:48 on the clock, Farah and Geremew broke away, setting up the dramatic finish.

They forged on side-by-side, nearly stride-for-stride until 2:03:35 showed on the clock. That's when Farah shifted gears to quickly build what would be an insurmountable gap. As he came off the final turn, the 35-year-old repeatedly punched at the cloudy skies in celebration before crossing the finish sporting his trademark mobot.

"The conditions weren't great and everyone was thinking about position rather than time, but towards the end we picked it up," Farah told an interviewer from NBC Chicago. "I felt good towards the end of the race. At the beginning I felt a bit sluggish but overall I'm very happy with it."

Farah now owns European records at 1500m, the half marathon and marathon.

The women's race set off at a brisk tempo as well, with the opening five kilometres covered in 16:47, on target for a sub-2:22 run. But unlike the men's race, just six women formed the lead pack: Kenyans Kosgei, Florence Kiplagat and Veronicah Nyaruai and Ethiopians Shure Demise, Birhane Dibaba and Roza Dereje.

The group remained intact through 10 kilometres, covered in 33:24, with Nyaruai dropping back by 15 kilometres. Little changed through the half (1:10:09) with the same five still at the front.

The first big, and ultimately decisive, move came some 10 kilometres later when Kosgei, the runner-up at April's London Marathon, surged away to a substantial lead and off on her own. She built a 45-second lead over Dereje by 35 kilometres, one she extended to more than two minutes five kilometres later. Ultimately, she clipped nearly two minutes from her previous best of 2:20:13 from London.

"I was happy and able to move today, no struggling," Kosgei told television interviewers. Like Farah, she will take home US$100,000 for the victory. 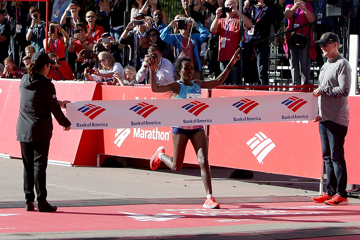 Dibaba dominates and Rupp times it right to w...