Felix Kipkemoi Keny fulfilled predictions that the 2013 Divina Pastora Valencia Marathon, an IAAF Bronze Label Road Race, would provide the fastest Marathon ever seen in Spain when he won the event in 2:07:14 on Sunday (17).

Not only the did he take 17 seconds off his personal best, set in 2012 at the Dong-A Marathon in Seoul, he took 16 seconds off the Spanish all-comers' best which had belonged to his compatriot Jackson Kipkoech after his win in Barcelona three years ago. Keny also sliced 45 seconds from the course record, set in 2011 by another Kenyan, Isaiah Kosgei Kiplagat.

Second place went to Eritrea’s Amanuel Mesel who took almost four minutes off his previous best when he crossed the line in 2:08:17 while Ethiopia’s 35-year-old Dejene Yirdaw, in his first race over the classic distance, completed the men’s podium.

A pack of about 20 runners, led by Qatari pacemaker Nicholas Kemboi, went through the halfway point in 1:03:44.

Kenya’s Jakob Kendagor was then responsible for maintaining the pace of just over three minutes per kilometre and took the group to 30km in 1:31:02

Shortly afterwards, Keny broke away and was never headed en route to notching up the biggest win of his career.

The leading trio were followed home by two Kenyans. John Nzau Mwangangi was fourth in 2:09:40 and Samson Kiptoo Bungei fifth in 2:10:58.

Ethiopia’s Azalech Masrecha fulfilled her role as the women’s race favourite by winning comfortably in 2:27:01, taking more than a minute off the previous course record of 2:28:08 set by Spain’s Maria Abel back in 2002.

There were no less than 9778 finishers in this year's Marathon. The start and finish of the Marathon was in the magnificent City of Arts and Sciences, which is close to the centre of Valencia.

Phil Minshull and Emeterio Valiente for the IAAF 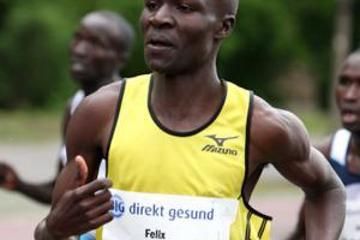 Could Valencia be the venue for Spain's faste...