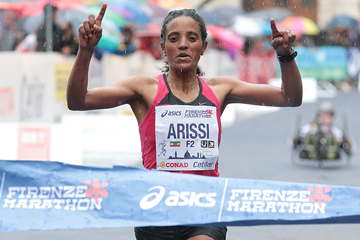 More than six years since she last lined up for a race of any sort, Ethiopia’s Dire Tune made a triumphant return to action at the 34th edition of the Florence Marathon, winning the IAAF Bronze Label road race in 2:28:55.

Meanwhile, debutant Zelalem Bacha of Bahrain won the men’s race in a tight finish as both he and Ethiopia’s Tadesse Mamo crossed the finish line in 2:14:41 on a cold and rainy day.

Tune, the 2008 Boston Marathon champion and world record-holder for one hour on the track, was the fastest woman in the field. But her PB of 2:23:44 was set back in 2010 and she hadn’t raced at all since the 2011 World Championships, during which time she had also become a mother.

A four-woman group, formed by Tune and fellow Ethiopians Amente Sorome Negash and Mesera Hussen Dubiso, as well as Kenya’s Euliter Tanui, went into the lead and passed 10 kilometres in 34:55.

The three Ethiopian runners broke away from Tanui at the halfway mark, which they passed in 1:13:49.

Negash and Tune pushed the pace, opening up a gap of 28 seconds over Dubiso at 35 kilometres (2:03:08). Tune pulled away from Negash by four seconds at 40 kilometres and increased her gap to 51 seconds in the final two kilometres, going on to win in 2:28:55, just 40 seconds shy of the course record.

The pack was soon whittled down to just Kemei, Kirwa, Bacha and Mamo, and they passed the halfway mark in 1:04:48 before reaching 25 kilometres in 1:16:56.

By the time they reached 30 kilometres in 1:33:19, Kirwa and Regasa had a two-second lead over Mamo, but the Ethiopian caught up with Bacha at 35 kilometres, while Kirwa fell behind.

The final two-kilometre section on the wet cobblestones was the toughest and the most dramatic part of the race. Having opened up a one-minute gap on Kirwa, the race went down to the wire in a thrilling final sprint finish between Mamo and Bacha, as both runners shared the same time of 2:14:41.