Fancy Chemutai enhanced her reputation as one of the rising stars of the road racing circuit with a course record on a warm and blustery day in the Gothenburg Half Marathon on Saturday (20) in 1:07:58.

Chemutai has only raced twice internationally but the 22-year-old excelled in both races. She finished third at the Prague Half Marathon on 1 April, clocking 1:06:58 on her debut at the distance before claiming her first overseas win in Gothenburg ahead of one of the in-form athletes on the roads this year.

After a steady opening 5km split of 15:51, defending champion and course record-holder Violah Jepchumba asserted the pressure on Chemutai with a 15:32 split through 10km in 31:23. Chemutai lost contact for the first time in the eighth kilometre but fought back to level terms with her fellow Kenyan, who finished one place ahead of Chemutai at the Prague Half Marathon last month in 1:05:22.

Rocking from side to side, Jepchumba was visibly working hard and her front-running efforts seemed to be reaping their reward. She eked out another small gap just before the 15km checkpoint in 47:48 but Chemutai countered it again on the gradual incline over the Gota Alv Bridge, one of two bridges on the course.

Despite slowing markedly after an aggressive start, the course record – and the event’s first ever sub-68-minute winning time – were still in touch as they raced back through the city centre and out towards the finish-line in the Slottsskogen Stadium.

Chemutai opened up a small gap on Jepchumba through the 20km checkpoint in 1:04:31 which she duly extended on the series of small undulations in the last two kilometres to ensure her first ever international win. Chemutai broke the tape in 1:07:58 to eclipse the course record by three seconds and take the scalp of Jepchumba, who had to settle for second in 1:08:10.

Margaret Agai made it a Kenyan clean sweep in 1:09:43 with Beatrice Mutai, the older sister of Olympic 1500m champion Faith Kipyegon, fourth in 1:10:14.

Geoffrey Yegon provided the first half of the Kenyan double in Gothenburg with victory in 1:00:19.

Three athletes were still in contention heading into the last kilometre but the runner-up from last year went one better this time, defeating Seoul Marathon winner Amos Kipruto (1:00:24) and Leonard Langat (1:00:33) while 2013 world cross-country champion Japheth Korir finished fifth in 1:01:39.

Defending champion and course record-holder Richard Mengich dropped out before the 15km checkpoint. 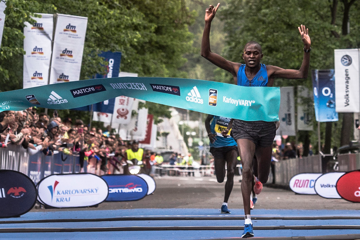