Morocco’s Mohammed Ziani and Tigist Girma of Ethiopia beat the rain and cold weather to take top honours at the Guangzhou Marathon, an IAAF Gold Label road race, on Sunday (9).

With the last minute withdrawal of pre-race favourite and Chinese all-comers’ record holder Moses Mosop, the race was only decided just before the finish. The 25-year-old Ziani emerged victorious from a four-man battle to claim his first 42.195km title in 2:10:44, 43 seconds shy of the course record set by compatriot Abdellah Tagharrafet in 2015.

It was the third marathon for Ziani, who clocked 2:13:40 to finish fifth in Guangzhou last year.

The race began in rainy and cold conditions with the temperature of about 10 degrees. A leading group of six, including two pace-setters, brought the field through 10km in 30:28 and 20km in 1:00:57.

The pacers stepped off the course at 25km and 30km respectively. The other four leaders, including Ziani, Tsegay Tuemay of Eritrea as well as Ethiopian duo Gadisa Shumie and Balew Derseh, remained together until they passed 40km in 2:03:59.

After a series of unsuccessful mini-breaks in the following kilometre, the quartet were still shoulder-to-shoulder until they reached the final kilometre. Tuemay was the first to fade away while Ziani broke away to build a lead of several metres. Shumie sped up in the last 10 metres but his effort were in vain as he clocked the same time as Ziani did but had to settle for second.

Flomena Cheyech of Kenya, the fastest entrant in the women’s race, stayed in the leading pack in the early stages but quit the title contest after 15km. The race was then dominated by two Ethiopians, Girma and Zinash Debebe, who led together from 15km to 35km, before Girma pulled away to notch the convincing 2:26:44 victory.

The 25-year-old Girma improved her personal best by 2:16 but her winning mark is still shy of the 2:25:12 course record set by fellow Ethiopian Rahma Tusa last year.

Debebe also improved her career best by 32 seconds as she finished second in 2:27:15. Sviatlana Kudzelich of Belarus, rallied to take third place in 2:32:04 in her debut over the classic distance.

Sprinting away from Shitaye Eshete in the final few hundred metres, Dalila Gosa won the Saitama Marathon, and IAAF Bronze Label road race, by four seconds with 2:25:35 on Sunday (9) to lead a 1-2 finish for Bahrain.

“I wanted to win and as expected I was able to win,” said Gosa whose performance was the second fastest on this course.

Three pace makers – Diana Kipyokei, Stacy Ndiwa and Kaori Yoshida – did a good job keeping the pace honest, clocking between 17:20 and 17:30 per each 5km segment in the early stages of the race.

The first major casualty was Ethiopian Fatuma Sado, who, hit by sever discomfort at the 20km aid station, was forced to drop out. That left five runners --Gosa, Eshete, Kenyan Sylvia Kibet and Saki Tokoro and Marie Imada of Japan-- plus three pace makers at the front. A couple kilometres later Tokoro and Imada fell back, leaving three in contention until the 35th kilometres when Kibet dropped back.

Upping the tempo, Eshete tried hard to leave Gosa behind in the waning stages, but she was able to hang on and a few hundred metres from the finish she unleashed her own sprint to secure the four-second victory and relegate Eshete to runner-up in this race for the second consecutive year.

“It was bit windy, so I stayed behind until the very end of the race,” Gosa said. “However, I was determined to sprint when I saw the finish line.” Gosa improved her best by more than a minute. It was her first marathon win.

Kibet of Kenya finished a distant third with 2:28:38. Marie Imada was fourth with a 2:29:35 lifetime best, but shy of the 2:29:00 qualifying standard for the Japanese Olympic Trials Marathon.

Kipkorir clocked 2:12:20 to claim a convincing victory, his first in three marathons this year. Felix Kirwa was a distant second in 2:13:43 with Andrew Kimtai third i 2:14:30. 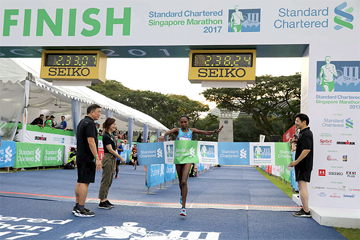 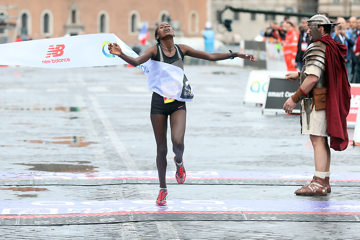