Hardee back on top, Johnson-Thompson breaks through in Gotzis

Two-time world champion Trey Hardee overcame a minor scare to win the decathlon at the IAAF Combined Events Challenge meeting in Gotzis, while Katarina Johnson-Thompson achieved the best mark in the world for two years to win the heptathlon at the Hypo-Meeting on Sunday (1).

After two fouls in the javelin, Hardee came away with a hard-fought win with a world-leading score of 8518, beating German 23-year-old Kai Kazmirek by just 47 points.

Defending heptathlon champion Brianne Theisen Eaton was in the form of her life and broke the Canadian record, but even that wasn’t enough to hold off 21-year-old Johnson-Thompson, who triumphed with 6682.

Johnson-Thompson, who was in second place overall at the end of the first day, won the long jump with an outdoor PB of 6.70m to overhaul overnight leader and last year’s Gotzis winner Theisen Eaton by 21 points. But the world outdoor and indoor silver medallist also performed well in the long jump, as the Canadian improved her personal best to 6.59m.

Thiam smashed her javelin PB to 51.90m to finish second behind Dutch Anouk Vetter (53.10m). This performance moved the young Belgian into the overall lead with one event to go. Theisen Eaton, usually a far superior javelin thrower to Johnson-Thompson, had been hoping to open up a points cushion after this event, but she could only manage 42.78m as her British rival set a PB of 41.44m.

Just 30 points separated the top three women heading into the final event. Thiam led with 5725 from Theisen Eaton (5695) and Johnson-Thompson (5690), but the latter had the fastest 800m PB.

In the 800m, Theisen Eaton pushed hard on the first lap, clocking a split of 59.85 at the bell. Johnson-Thompson followed her closely and pulled away to take the win in 2:08.16 to take the overall title with a world-leading 6682, the best mark in the world since compatriot Jessica Ennis-Hill won the Olympic title in 2012.

“To add my name to the hall of fame of past winners of Gotzis at the entrance of the Mosle Stadium means everything to me,” said Johnson-Thompson after adding more than 200 points to her PB. “The hurdles were good but I thought I could run faster. In the high jump I wanted to jump higher than 1.90m. The 6.70m was solid. I am pleased with my javelin PB. In the 800m I tried to stick with Brianne who pushed hard from the start.”

Johnson-Thompson follows in the footsteps of past British winners in Gotzis Denise Lewis (1997) and Jessica Ennis (2012). She also moves to third on the British all-time list behind those two athletes, both of whom went on to win Olympic gold medals.

The only 21-year-old to have scored higher than Johnson-Thompson’s 6682 is Carolina Kluft, three-time world champion and 2004 Olympic champion.

Theisen Eaton added more than 100 points to the PB she set when winning the silver medal at last year’s World Championships. Her score of 6641 added 42 points to the Canadian record set two years ago by Jessica Zelinka.

For the top two finishers, Gotzis was something of a dress rehearsal for this summer’s Commonwealth Games in Glasgow where Johnson-Thompson and Theisen Eaton will square off again for what promises to be one of the highlights of the Games.

“It was a good weekend for me but I’m disappointed that I didn’t win,” said Theisen Eaton, wife of Olympic champion and world record-holder Ashton Eaton. “I’m pleased with my long jump and the 200m. Katarina is a very talented athlete and I’m looking forward to competing against her at the Commonwealth Games in Glasgow. It will be an exciting competition.”

Despite some ups and downs and a modest 1.69m in the high jump, Schippers finished on a high note, taking 0.03 off her 800m personal best to break her own Dutch heptathlon record with 6545.

“I had some ups and downs, especially in the high jump where I had problems with my run-up, but I set two national records in the 200m (22.35) and in the heptathlon,” said Schippers. “I will prepare for the heptathlon at the European Championships in Zurich but I will take part in some individual sprint events in the Diamond League.”

The top six heptathletes scored personal bests in what proved to be a high-quality competition. World indoor champion Nadine Broersen scored 6536, which would have been a Dutch record, had compatriot Schippers not finished nine points ahead.

European junior champion Nafissatou Thiam added more than 200 points to her own Belgian record to finish fifth with 6508. It was just the third time in history that five women had scored more than 6500 points in the heptathlon; the two other occasions that feat had been achieved was at major championships, the 2011 World Championships and 2012 Olympics.

Schafer demolished her career best by more than 300 points to score 6386 in sixth place. In total, 19 heptathletes scored more than 6000 points.

Germany’s Olympic silver medallist Lilli Schwarzkopf enjoyed a good come-back from an achilles tendon injury to score 6215 in 10th place. Her compatriot Claudia Rath, who finished fourth at last year’s World Championships, had three fouls in the long jump and did not finish.

Trey Hardee stormed to 13.69 in the 110m hurdles, his second-fastest clocking ever within a decathlon, to narrow the gap to 57 points behind overnight leader Kai Kazmirek. The European under-23 champion from Germany missed his personal best by 0.02 with 14.15 but maintained his overall lead.

Kazmirek finally relinquished his lead in the discus as Hardee threw 49.09m – five-and-a-half metres farther than Kazmirek – to move 56 points clear of his German rival. Freimuth improved his personal best to 49.41m to move up one more place into third. Brazilian teenager Felipe Dos Santos, who was fifth after the 110m hurdles, had three fouls.

Hardee cleared 5.06m in the pole vault to increase his lead to 87 points over Kazmirek who cleared 4.96m. A 4.86m clearance was enough for Freimuth to hold on to third place ahead of Garcia. Thomas Van Der Plaetsen was the best in the pole vault with 5.16m to move up from seventh to fifth in the overall rankings.

The javelin didn’t produce any major changes to the positions, but Hardee survived a big scare when he threw two fouls in his first two attempts. He finally managed a safe 58.20m in the third round to keep his hopes of winning alive, extending his lead to 116 points over Kazmmirek, 7867 to 7751.

Great Britain’s Ashley Bryant produced the best throw of the day with 69.65m to move into eighth place heading into the final event.

Kazmirek gave his all in the 1500m, setting a personal best of 4:33.78, but it was not enough to beat Hardee who crossed the finish-line 11 seconds behind the 23-year-old German. Hardee held on to his overall lead by just 47 points, winning with 8518, three years after his first triumph in the Austrian town.

Kazmirek improved his PB by more than 100 points to finish second with 8471. Freimuth completed a great day for Germany, finishing third with 8317.

“I’m disappointed about the weekend,” said Hardee after completing his first decathlon since taking Olympic silver in 2012. “I escaped with the win after two tough days but I underperformed. My performances were below my expectations.  My goal this year is to be the world No.1. I’m planning to compete at the US Championships.” 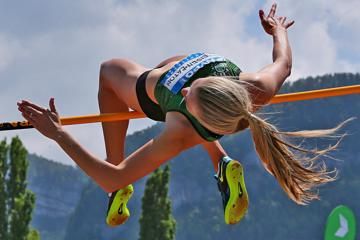