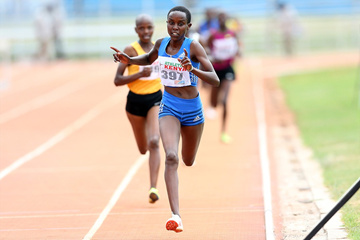 Chepkirui among winners at Kenya’s World U18 Trials

Kenya’s top teenage talent was on show this week as they competed for places at the IAAF World U18 Championships Nairobi 2017.

The two-day trial event concluded on Wednesday (14) at Nyayo Stadium, just 16 kilometres south of Moi Sports Centre Kasarani where the global event will be held next month, and provided glimpses of the host nation’s medal hopes.

Competing over the shorter distance of 3000m, world U20 5000m silver medallist Emmaculate Chepkirui lived up to expectations to win by more than a second in 9:05.7.

“I really wanted to get into this team and when I came in for the race, my target was to do my best and not look at anybody else,” said the 17-year-old, who finished ninth in the U20 race at the IAAF World Cross Country Championships Kampala 2017. “It was tough but I felt I was in very good shape and I am happy to have won.”

Dominic Kipkemboi came out on top in a competitive 1500m final, winning in 3:44.0. George Manangoi, younger brother of world 1500m silver medallist Elijah Manangoi, finished second in 3:44.4 to secure the other spot on the team.

The 3000m final was an equally high standard race, won by Edward Zakayo from Stanley Mburu.

“I am so joyful. I have always wanted a chance to wear that Kenyan jersey in an international competition and now I have it,” said Zakayo. “Now I want to go and work harder, work on my speed and ensure that come next month I will be in shape.”

Elsewhere, Edna Jebitok won the girls’ 1500m in 4:16.9, finishing 0.4 ahead of Rachael Nzangi, while Edward Bett and Caren Chebet came out on top in the respective boys’ and girls’ steeplechase finals.