With a 2:06:26 lifetime best, the 33-year-old arrived in Kosice as the fastest in the field, experience he said, that was the key to his victory.

"My experience was the decisive moment," said Kiyeng, who ran patiently until making his decisive attack in the 38th kilometre.

"I was not expecting we would be in a group of six at the 35th kilometre, and that later we would still have three. So I pushed. In my first race here I was very thankful for the support from the crowd and I want to come back to attack the course record."

The opening half went off at an honest clip, with pace-setters – and sub-2:10 runners – Charles Cheruiyot and Richard Sigei bringing the leaders through the midway point in 1:04:09.

But with temperatures rising – which neared 20C at the finish – the second half went turned out to be a little slower (1:04:49).

Tadesse Mamo of Ethiopia produced a surprise, finishing third in his debut over the distance – and in his first race outside of Ethiopia – clocking 2:10:17.

Further back, Kenyans Daniel Kiprop Limo and Henry Chirchir both dipped under 2:11, finishing fourth and fifth in 2:10:31 and 2:10:40 respectively.

The women's race began well with a solid 1:13:53 midway split, but as in the men's competition, the second half witnessed runners struggling with the warming conditions.

Kenyan Emily Ngetich, on paper the fastest with 2:25:14 credentials coming in, was exhausted by the time she crossed the line, finishing second in 2:33:57.

Further back, Tinbit Gidey Weldegebriel from Ethiopia was third in 2:40:49.

Nearly 12,000 from 58 countries runners competed in the various races, both participation records. 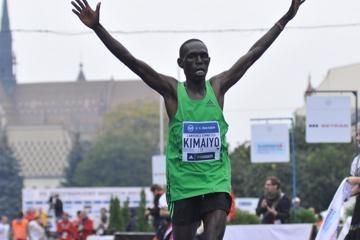 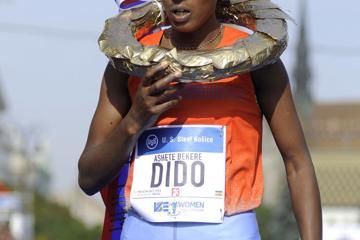