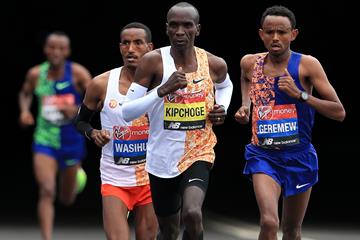 Seven months after he destroyed the world record, Eliud Kipchoge cemented his status as the greatest marathon runner of all time on Sunday (28) by clocking the second-fastest time in history and becoming the first man to achieve a quartet of victories at the Virgin Money London Marathon, an IAAF Gold Label race.

The Kenyan world No.1 delivered another marathon masterclass to triumph in a super-quick 2:02:37 – carving 28 seconds out of the London course record he set three years ago and bringing him an unprecedented fourth win in The Mall after his previous victories in 2015, 2016 and 2018.

His winning time has only been bettered by the world mark of 2:01:39 he set in Berlin last September and one was left wondering whether it might have been even quicker in less windy weather conditions.

It was his 10th consecutive victory over 26.2 miles and completed a double celebration for Kenya after his compatriot, Brigid Kosgei, took first place in the women’s race in a lifetime best of 2:18:20.

Kosgei, who also won in Chicago in October, secured her own place in the record books after running the second half of the race in 1:06:42 – the quickest ever second half of a marathon by a woman. Her first half was a rather more pedestrian 1:11:38 after a surprisingly cagey start to the women’s race.

Despite the slow beginnings, her winning time moves her to seventh on the world all-time list, which suggests she is capable of going much faster in a more conventionally paced race.

Kipchoge led the men’s race from start to finish, controlling the pace and looking comfortable throughout, though it was testimony to the quality of the field that he was only able to put the result beyond doubt in the last couple of miles.

Ethiopian pair Mosinet Geremew and Mule Wasihun, both debutants in London, ran a spirited race to stick with Kipchoge all the way to the 24-mile mark on The Embankment, though the Kenyan responded by steadily applying the throttle to pull away from his two rivals.

“I knew they were on my back but that was okay,” said Kipchoge. “That’s sport and I wasn’t worried. In sport, you have to show what you’ve done in training. I was always confident I would win.”

Within a blink of an eye, both men were dropped, leaving Kipchoge alone to milk the applause as he entered The Mall with several waves to the noisy crowds celebrating his historic fourth victory.

Incredible finish from @EliudKipchoge to win the #LondonMarathon in 2:02:38 👑

The fastest ever winning time and the second-fastest marathon EVER🔥pic.twitter.com/dSFd7WN3hC

“The crowd in London is wonderful,” said Kipchoge. “In the last kilometre, when everyone is shouting, it’s just amazing. It made me so happy to cross the line.

The expected challenge from home favourite Mo Farah failed to materialise, however. The Briton had been hoping to build on his maiden marathon triumph in Chicago but fell off the back of the leading group shortly after the halfway mark as Kipchoge injected a surge of pace with a 4:32 14th mile.

By Farah’s own admission, “the wheels came off” at 20 miles and he looked distinctly heavy-legged as he finished fifth in 2:05:39 – more than three minutes behind Kipchoge.

“I am definitely disappointed with my result,” said Farah. “Training has gone well and I felt great at the start. My aim was to follow the pacemaker, but after 20 miles when he dropped out, the gap opened up and it became hard to close.

“Congratulations to Eliud. The better man won today. He is a very special athlete and he is humble. If Eliud can run those sort of times, it just gives us another level of possibility.”

Even before the race, the four-time Olympic and six-time world champion admitted he was contemplating a return to the track for the 10,000m at the IAAF World Athletics Championships Doha 2019 in September if it offered a better chance of winning a medal. After this performance, that now looks even likelier, though Farah said he would take some time to weigh up his options.

Kosgei finished second behind Vivian Cheruiyot on her London debut last year but turned the tables on her fellow Kenyan with her brilliant second half to the race.

The pair broke free of their rivals by the 18-mile mark before Kosgei put in a surge to try to break Cheruiyot’s resolve. The attack proved short-lived as Cheruiyot reeled her back in by 20 miles but Kosgei immediately responded with another injection of pace.

This time Cheruiyot had no answer and Kosgei, who had come into the race on the back of two big half-marathon personal bests in Houston and Bahrain, closed out the race by running close to five-minute mile splits for the last five miles.

Kenya’s Brigid Kosgei wins the 2019 #LondonMarathon in an incredible 2:18:20 to defeat @VivianCheruiyot 🇰🇪

Her turn of pace proved so devastating that Cheruiyot was almost two minutes behind her when she reached the finish in 2:20:14. Ethiopian Roza Dereje held off Gladys Cherono by a second to take third place in 2:20:51.

Asked about the slow early pace, Kosgei said the gusty conditions had made running difficult in the first half of the race.

“The wind was a problem for me today,” said Kosgei. “It was hard for me to get my breath but I’m very happy to have done so well.

“I didn’t really know how far ahead I was. I looked back a couple of times then realised everything was ok. I’m extremely happy in my performance and everything went to plan.”

Mary Ketainy, the Kenyan pre-race favourite after her three previous London wins and her convincing triumph in New York in November, dropped out of contention after 17 miles and finished down in fifth place in 2:20:58.

Simon Hart for the IAAF