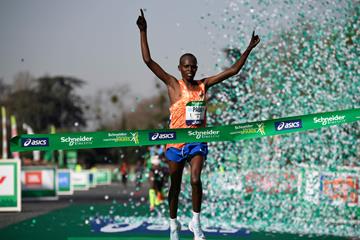 Lonyangata clocked 2:06:25 to become the first man to win back-to-back titles since Briton Steve Brace in 1989 and 1990. Saina clocked 2:22:55 to take the win in the first marathon she's completed.

In the men’s race, a large group detached itself from the gun with 20 athletes, including all the favourites, reaching five kilometres in 14:54. They maintained a steady tempo, hitting the 10km marker in 29:51, suggesting a possible finish time of 2:06:00.

At the front, the three pacemakers --Kenyans Joseph Kiptum, Ben Kiptai and Edwin Koech-- took turns to sustain a regular rhythm. The group of 20 passed the 15km checkpoint in 44:55 and forging on, the trio carried maintained the pace to hit the 20-km mark in 59:48. Nineteen athletes composed the leading group at halfway, passed in 1:03:00. Only Tariku Bekele began to struggle with the pace.

One kilometre later, as the pace slowed slightly, Lonyangata made his first move to test his opponents, followed by compatriot Mathew Kisorio, who then shot out of the lead pack. Only Kenya’s Ernest Ngeno, Lonyangata and Ethiopia’s Yitayal Atnafu were able to sustain his pace. They passed the 35th kilometre marker in 1:45:08, 15 seconds ahead of their nearest pursuers.

Then Atnafu bean to falter, leaving Kisorio, Ngeno and Lonyangata in contention for the victory. Kisorio ran a relentless pace, with the pair on his heels.

Midway through the 40th kilometre, Lonyangata decided to put in a surge, leaving Kisorio behind for good. Lonyangata then took advantage of having the lead women in sight –-the women’s race had begun 16 minutes and 26 seconds before the men’s-- to continue his quest for a successful title defence. He eventually caught the leaders before crossing the line in 2:06:25, 15 seconds outside his personal best set last year in Paris.

Just a few seconds after Lonyangata’s success, Saina, who was a last minute entry, broke the tape in 2:22:55 to take the women’s title. Following a notable track career -- the 30-year-old was fifth in the 10,000m at the 2016 Olympics Games-- decided to move up to the longer distances. She didn't finish in Tokyo and New York last year, but now, two months after lowering her half marathon best to 1:09:17, she finally delivered.

Leonida Mosop of Kenya was in charge of the pace. She led a group of 12 who went through the 10-kilometre mark in 33:22, suggesting a possible finish of time 2:20:55 -- under the course record set last year by Kenya’s Purity Rionoripo.

But then the rhythm of the lead pack slightly faded over the following kilometres. Fifteen kilometres was reached in 50:19 and the half marathon in 1:10:21.

At that point, nine women remained in contention, excluding the pacesetter Mosop. The lead pack reached the 25-kilometre mark in 1:23:59, with Yuka Takashima of Japan five seconds adrift.

Mosop completed her duties soon after, leaving the eight women at the front eyeing each other, planning their moves. No one decided to push the pace, allowing Takashima to bridge the gap. The five-kilometre stretch between 25 and 30 kilometres was covered in 17:38, illustrating how the tempo had slowed.

As they approached the 35th kilometre, Amane Gobena, the fastest women in the field courtesy a PB of 2:21:51, fell at the water station and lost some ground over her opponents. With four kilometres remaining, Saina made her decisive move, opening a small gap over Ruth Chepngetich and Gulume Chala. She reached 40 kilometres in 2:15:47, four seconds ahead of Chepngetich, with Chala trailing another second behind. As the final stretch loomed, Chepngetich joined the leader. But in a very close and dramatic finish, Saina found the reserves to change gears and prevail by four seconds over Chepngetich and 11 ahead of Chala.

“I’m so happy,” Saina said. “Paul (Lonyangata) pushed me a little bit (when he caught up with her). It’s really good to win my first marathon.”