Wilson Erupe Loyanae of Kenya collected a fourth Seoul Marathon title while Damte Hiru of Ethiopia prevailed in the women's contest at this IAAF Gold Label road race on Sunday (18).

The 29-year-old Loyanae broke from the lead pack in the final five kilometres to take the win in 2:06:57, six seconds clear of compatriot Mark Korir.

Loyanae's first victory in the Korean capital came in 2012, when he clocked a 2:05:37 course record. He won again three years later in 2:06:11 and then successfully defended that title in 2016 in 2:05:13, lowering his course record. He was back last year but in a quality race, finished fifth.

The race opened swiftly. A pack of nine reached five kilometres in 14:49, ten kilometres in 29:39, 15 in 44:41 and 20 in 59:59. The next five-kilometre stretch witnessed a breakaway attempt by Ethiopian Deribe Robi and Kenyan Paul Kipkemoi Kipkorir, who built a 10-second lead over the chase pack of seven, reaching the 25-kilometre check point in 1:14:57.

Forging on, the pair extended that lead to 18 seconds five kilometres later but paid for those early ambitions in the next five-kilometre stretch when they were caught by Loyanae, Korir, Benson Kipruto, Marius Kimutai and Filex Kipchirchir.

The next stretch would prove decisive. Loyanae broke away to gradually piece together a five-second lead over Kipruto at 40 kilometres, with Korir hanging on another two second back. In the waning metres, Korir mad up significant ground, passing Kipruto, but unable to catch the leader. Korir clocked 2:07:03 and Kipruto 2:07:11 to clip 10 seconds from his previous lifetime best.

The women's race began in similar fashion with a group of eight running together through 20 kilometres in 1::08:06. That group was reduced to five by 25 kilometres: Ethiopians Hiru, Mulu Seboka Seyfu and Gutemi Shone Imana and Kenyans Margaret Agai, the defending champion, and Monica Jepkoech.

But Hiru would soon make her decisive break. The 24-year-old led by 23 seconds at 40 kilometres and went on to take her first career victory over the distance, finishing unchallenged in 2:24:08. Agai and Jepkoech made up some of that ground over the closing stages but still finished well back, clocking 2:24:30 and 2:24:31 to finish second and third. Seboka was next in 2:25:01. 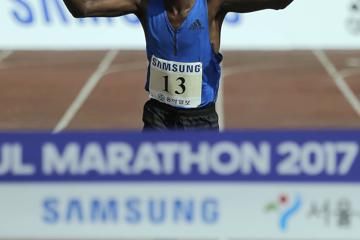 Kipruto and Agai prevail in Seoul... 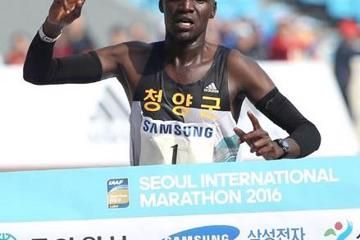 Loyanae gets course record at the Seoul Inter...