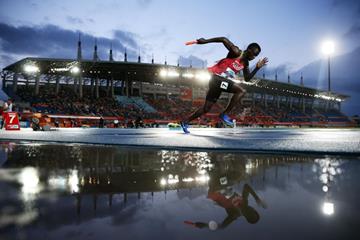 Canada exorcised the demons of Saturday night’s dropped baton with a commanding performance in the heats of the men’s 4x200m on Sunday evening (23), but it wasn’t without controversy.

After an apparent false start, lead runner Gavin Smellie was issued a red card ahead of the first heat, but the Canadian argued his case with officials over the ensuing minutes, the end result seeing his baton handed back to him and the red card withdrawn.

“There was maybe a little twitch, but I didn’t move,” said Smellie afterwards. “I was asking the officials to watch the video to see there was no false start. I’m happy we got back in.”

After a clean start second time around, Smellie ran a strong opening leg, handing over to Brendon Rodney who powered through the second leg to put his team in front at halfway.

Andre De Grasse was next up for the Canadians, and the Olympic 200m silver medallist extended their lead over Jamaica, giving Aaron Brown an eight-metre advantage ahead of the final leg.

With Jamaica’s Warren Weir in hot pursuit, Brown had to run a strong opening half of his leg, but approaching the finish he had enough in command to ease off the throttle and coast across the line, bringing his team to victory in 1:21.11.

Jamaica took second in 1:22.01, with Trinidad and Tobago third in 1:22.79, a national record. Kenya finished a creditable fourth, their time of 1:23.04 enough to see them through to the final.

With the gauntlet laid down, the second heat saw a response in kind from Canada's neighbours and rivals, the United States. They were led off by Noah Lyles, who blazed through his opening leg and handed off with precision to Jarrion Lawson. He consolidated their advantage on the second leg before a cautious, but safe, exchange with Isiah Young.

There was a brief moment of anxiety for the USA at the final exchange, as Young ran up on anchor athlete Ameer Webb, but Webb adjusted his stride accordingly approaching the end of the zone and escaped with baton in hand. He cruised down the home straight to bring his team home in 1:21.47.

Behind them, Shavez Hart of The Bahamas powered through to take second in 1:23.71, with China a close third in 1:24.01. A national record of 1:24.33 from Antigua & Barbuda saw them take fourth and advance to the final as a non-automatic qualifier.