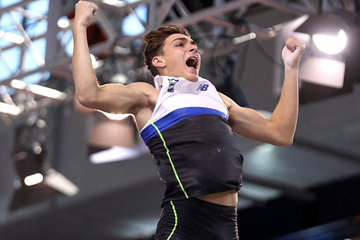 The European junior champion, who is based in the USA but represents Sweden in international competition, sailed over 5.83m on his second try before three unsuccessful attempts at what would have been an outright PB of 5.92m.

It was the second-best performance of his career so far, behind only his world U20 record of 5.90m set in April last year.

World and Olympic silver medallist Sandi Morris dominated the women’s competition, winning with a clearance of 4.90m, her best vault since clearing 5.00m at the IAAF Diamond League final in Brussels in September 2016.

[NOTE 18 Jan 2018: Performances in the elite men's competition have been ruled invalid for record purposes because the wrong size crossbar pegs were used during the competition.]

Training partners Omar McLeod and Kendra Harrison jumped straight to the top of the early-season 2018 world indoor lists with their season debut performances.

Competing at the Kentucky Invitational, world and Olympic champion McLeod won the men’s 60m hurdles in 7.53. Harrison, meanwhile, sped to a 7.82 clocking in the women’s event and then won the 200m in an indoor PB of 23.16, beating world 400m hurdles champion Kori Carter by 0.2.

In a high-quality women’s 60m at the Leonard Hilton Invitational in Houston, 2013 world silver medallist Murielle Ahoure impressed by taking victory in 7.11. Michelle Lee-Ahye of Trinidad and Tobago was second in 7.18, just 0.02 ahead of Jamaica’s Remona Burchell and Aaliyah Brown.

World 400m silver medallist Steven Gardiner set a Bahamian indoor 300m record of 32.51 at the Blazer Invite in Birmingham, Alabama. World indoor and Olympic finalist Bralon Taplin, meanwhile, came close to his own indoor PB to win the 400m in 45.48 at the Ted Nelson Invitational in College Station.

Two-time NCAA indoor champion Trey Culver added seven centimetres to his outright PB to win the high jump at the Texas Tech Corky Classic. The 21-year-old sailed over 2.33m on his first try – just as he had done to set PBs at the earlier heights of 2.27m and 2.30m – and then rounded out his series with three misses at 2.36m.