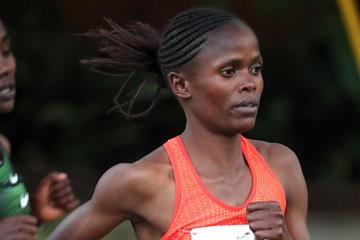 Kenya’s Brigid Kosgei showed she is in great shape ahead of her London Marathon appearance in April by winning the Aramco Houston Half Marathon by almost a minute and breaking the North American all-comers’ record with 1:05:50 at the IAAF Gold Label road race on Sunday (20).

On a cold morning with temperatures only just above freezing, the opening five kilometres were covered in a comfortable 16:07 with about nine women forming the lead pack, but Kosgei and fellow Kenyan Fancy Chemutai soon upped the pace, reaching 10 kilometres in 31:33.

Only Ruti Aga and Gladys Cherono, two of the fastest marathon runners in history, were able to stick with the pace, but even they couldn’t handle it for too long. Kosgei and Chemutai reached 15 kilometres in 46:52 – having covered the 10-kilometre section between five and 15 kilometres in 30:45 – and had opened up a gap of 17 seconds on Aga. Cherono was a further 24 seconds in arrears.

Chemutai then began to struggle while Kosgei relentlessly continued out in front. She went on to cross the finish line in 1:05:50, moving to 11th on the world all-time list and taking 45 seconds off her lifetime best. Her time also took 39 seconds off the previous North American all-comers’ record, set by Mary Wacera at the 2016 Houston Half Marathon.

Aga made up a bit of ground in the closing stages but Chemutai held on to second place in 1:06:48, almost two minutes shy of the PB she set when winning the Ras Al-Khaimah Half Marathon last year. Aga, the defending champion, finished third on this occasion in 1:06:56.

Monicah Ngige was rewarded with a big PB of 1:07:29 in fourth, while USA’s Emily Sisson missed breaking the North American record by just five seconds, clocking 1:07:30 for fifth place.

In the men’s contest, Shura Kitata timed his race to perfection to win in 1:00:11 and finish just three seconds ahead of fellow Ethiopian Jemal Yimer.

Kitata, the runner-up at last year’s London and New York City marathons, was part of a large lead group through the first five kilometres (14:30). The pack whittled down slightly to six men as 10 kilometres was reached in 28:32, then Geoffrey Koech started a fade a few kilometres later, leaving five men to reach 15 kilometres in 42:49.

Kitata still had Yimer, Bedan Karoki and Tanzania’s Gabriel Geay for company at the 20-kilometre point (57:16). Geay then started to drop off the lead pack while Yimer put in a slight surge at the front, but he had mistakenly followed the lead vehicle as it turned off the course near the finish.

Yimer managed to regain the lead, but Kitata and Karoki were still close behind. As they approached the final bend, Kitata unleashed his finishing kick and Yimer couldn’t respond as the duo crossed the line in 1:00:11 and 1:00:14 respectively.

Biruktayit Degefa retained her title at the Chevron Houston Marathon and came within 14 seconds of the course record, while Kenya’s Albert Korir won a close men’s contest at the IAAF Silver Label road race.

In a resounding three-minute victory, Degefa set a personal best of 2:23:28 and became the third woman in history to win the Houston Marathon three times. It was also the 13th consecutive win by an Ethiopian woman in Houston.

Degefa was challenged through 30 kilometres by Meseret Belete, the 19-year-old who holds the world U20 best for the half marathon and who was making her marathon debut. But Belete couldn’t respond when Degefa picked up the pace just after 30 kilometres, and was passed near the finish by Belaynesh Fikadu, who finished as runner-up in 2:26:41.

Belete was third in 2:26:51, securing an Ethiopian sweep of the podium.

“When I prepare to come here to Houston, I really get excited,” said Degefa, who lives in Albuquerque but trained for this race in Ethiopia. “I come to win.”

Korir, meanwhile, had never been to the USA before and had to battle until the final kilometre when he slowly pulled ahead of Ethiopia’s Yitayal Atnafu to win in 2:10:02, six seconds ahead of the man who would become runner-up here for an astonishing fourth year in a row – on his 26th birthday, no less.

Justus Kimutai of Kenya finished third in 2:10:25 as less than a minute separated the first five finishers.

“I am grateful to win this race on my first time in America,” said 24-year-old Korir, who has finished on the podium in all of his marathons to date.

Ethiopia’s Worknesh Alemu and Kenya’s Cosmas Lagat upset the formbook and produced outstanding performances in hot conditions to triumph at the Tata Mumbai Marathon on Sunday (20), winning at the IAAF Gold Label road race in 2:25:45 and 2:09:15 respectively.

Both marks were the second fastest winning times in the history of the event, the pair taking first prize cheques of USD $45,000.

With temperatures higher than expected and reaching 23C when the gun went, the leading women started with a flourish and the sizable leading pack with their male pacemakers went through 10 kilometres in 34:28 and 20 kilometres in 1:08:42.

Four women – Alemu and her Ethiopian compatriots: pe-race favourite Amane Gobena, Birke Debele and Mergetu Alemu – were still in contention at 30 kilometres which was passed in 1:43:14, still giving hope that the course record of 2:24:33 set by Kenya’s Valentine Kipketer in 2013 could be challenged.

Mergetu Alemu soon dropped off the pace and a couple of kilometres down the road so too did Debele, but Gobena doggedly held on for two kilometres more until Worknesh Alemu made a second and decisive surge just before 35 kilometres.

Alemu shook off Gobena but given the credentials of her rival and the intensity of the conditions, with temperatures by now having risen to 26C, nothing was certain. But Alemu maintained her focus to clock an impressive personal best of 2:25:45 and finish 24 seconds ahead of the defending champion, who finished second in 2:26:09, despite suffering from stomach problems over the final 10 kilometres.

Debele hung on for third in 2:26:39 as Ethiopian runners filled the first seven slots.

India’s Sudha Singh finished eighth in 2:34:56, an Indian best in Mumbai, a personal best and the second fastest time by an Indian woman ever, just 13 seconds away from the national record.

As magnificent as Singh’s performance was by local standards – and she booked her place on the team going to the IAAF World Athletics Championships Doha 2019 in September – she might be left to rue her cautious first half, running more than seven minutes behind the leading pack, before uncorking a huge negative split by almost six minutes from the halfway point onwards.

However, Lagat made a decisive surge just before 29 kilometres and quickly put daylight between himself and his rivals, partially splitting up the leading pack.

Lagat passed 30 kilometres in 1:32:34, assisted by two pacemakers whom he kept instructing to go faster, with a chasing pack of seven men 11 seconds behind.

The remaining pacemakers were to drop out at about 32 kilometres but Lagat bravely pressed on and kept on increasing the gap, to almost 40 seconds by 35 kilometres, although later he admitted that despite feeling strong, he spent much of the final 10 kilometres running scared.

“It was a good moment to make a break, but I also knew there were good runners behind me,” he said. “From 35km I was never sure how close there were to me or whether they were coming back to me.”

In fact, at 38 kilometres he had almost a minute’s lead before Ethiopia’s Aychew Bantie edged away from his compatriot Shumet Akalnew in the closing kilometres to clinch second and reduce the winning margin to 50 seconds by the finish.

Lagat crossed the line in 2:09:15 for his third win over the classic distance in six outings, his other two victories also coming in hot weather conditions in the Spanish city of Seville. Bantie finished second in 2:10:05 and Akalnew third in 2:10:14.

“I thought Lagat might come back to us in the last kilometres because he had changed his pace so quickly and he ran so fast (between 29 and 35 kilometres),” said Bantie. “But after 35km I knew I was running for second place.”

Pre-race favourite Abera Kuma, the fastest man in the field with a best of 2:05:50, drifted away from the leading pack just after 30 kilometres and from that point was never in contention for a place on the podium, eventually finishing seventh in 2:13:10.