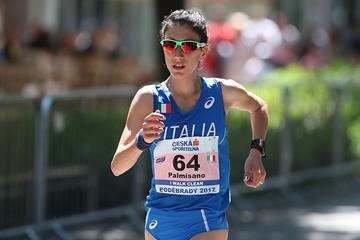 The latest IAAF Race Walking Challenge race saw Europe’s finest return to Podebrady, Czech Republic, on Sunday (21) for the second time in just over a month.

Following April’s European Athletics Permit meeting, the beautiful shaded park course in the spa town 50 kilometres east of Prague proved the perfect place for fast racing – and there were none faster than Antonella Palmisano.

The Italian built on her 41:57.27 for 10,000m in Orvieto last month to win the European Race Walking Cup as well as pile up points in the challenge.

The 25-year-old is now considered a favourite for the IAAF World Championships London 2017 in August. In fact, the race was as good as over before it began.

The foregone conclusion that Palmisano would dominate proved sound – and dominate she did.

In the lead from the gun, the Italian piled it on and at halfway she was already 27 seconds ahead of a group of four.

Her fourth-place finish at last year's Olympics confirmed her status as Italy’s current top female race walker and she has since gone from strength to strength.

But this was her first senior title win after coming to light at the 2010 IAAF World Race Walking Cup where she was a surprise winner of the U20 title.

Wearing long compression socks, Palmisano looked anything but worried. She was lapping backmarkers before the fourth one-kilometre lap, and her personal best of 1:27:51 was clearly in danger coming up to the last 50 metres.

She darted over to the side of the course, clutched at a supporter’s Italian flag with ‘Forza Antonella’ on it, dropped it, picked it up and strolled to the line in 1:27:57 to miss re-writing her best by six seconds.

Portugal were looking strong with both Ana Cabecinha and Ines Henriques in contention for medals. However, the latter’s dream was dashed just shy of 15 kilometres when she incurred the judges' displeasure and got shown the dreaded red disc.

This left Cabecinha and race surprise Laura Garcia-Caro from Spain in the medal frame.

The Portuguese dug on vast reserves to inch ahead, with Ukraine’s Nadiya Borovska chasing Garcia-Caro whose 1:29:32 personal best dates back to the last European Cup on home soil at Murcia in 2015.

This time she was 26 seconds slower, but was handed a fine bronze medal to take home instead.

Following the pair, a second Ukrainian, Inna Kashyna, was in effect race walking solo despite lapping athletes all the time.

She got a second wind to pass a tiring Borovska and claim fourth, with Spain’s Maria Perez saving the best to last to accelerate and bag a PB by 54 seconds.

Palmisano looked surprised when told she had missed out on a PB, but quickly recovered to say it was ‘unimportant’.

"What mattered,” she added, “was having the flag in my hand to win my first major senior race.”

Cabecinha is now 33, but believes she too has found a second wind.

“The training for five months after the Olympic Games have been very slow, but I am getting back to normal now," she said. "It is a different year and I am looking forward to London and the World Championships.”

In the men’s 20km, Christopher Linke aptly demonstrated his love for Podebrady.

Three first places and a second in the past two years on this course suggests the German is home from home.

The only problem the 1.90m tall athlete encountered en route to gold was ducking under a sponsor’s sign every lap too high for everyone else to reach.

And it looks as if the heady heights of major wins to follow are also on the horizon for a race walker who first appeared on the world scene as an U20 athlete in another spa town more than 10 years ago.

No one got close to the 28-year-old once he broke away at eight kilometres and continued to turn a gap into a chasm.

Raced in the afternoon heat, but with plenty of shade to stave of the worst of the fierce sun, the first four one-kilometre laps were knocked off with metronomic precision in 4:04 by a group of 30-plus. At 5km (20:17), the pace had increased slightly and then Linke really got into his massive stride to end the contest for top of the podium.

The race for the places became a drawn out affair between France’s Kevin Campion, back to form, world champion Miguel Angel Lopez and Perseus Karlstrom from Sweden, enjoying the race of his life.

After a disappointing 2016 by his standards, Lopez injected the speed needed to get away from his pursuers at 17km to claim silver, and the chief judge’s disqualification disc decided bronze when Campion was removed.

Great Britain’s Tom Bosworth felt the heat in all senses as he struggled to ignore a hip injury, but fourth was a decent return as he builds for the World Championships.

Marius Ziukas was a distant fifth, but only a few seconds outside his PB as Lithuania also claimed a women's team bronze.

Linke believes his time has come.

“I have one of the best coaches in the world in Ronald Weigel (1987 world silver medallist). It is a great motivation and there is a saying which says that when you train with the best, you learn to win.

"I love it here in Podebrady even though it has been a hard year," he added. "After 10k, I went at my own pace and I really enjoyed it. I truly feel this is my time to shine."

The 50km went to form with Ivan Banzeruk playing the waiting game and striking at 38km to take an unassailable lead.

The Ukrainian came into the race with a 3:44:49 personal best, and in the end, pedigree paid off. By holding back, the 27-year-old finished strongest, and teammate Igor Glavan picked up the theme to up the pace and claim a deserved silver medal.

Bronze went to an Italian, but not the one who led the race for 23km.

Michele Antonelli was close to four minutes behind Teodorico Caporaso at one stage, but it was the former who came through for a place on the podium. However, Antonelli's conservatism was a case of necessity.

After picking up two warnings by halfway, he was forced to rein in to avoid the dreaded third. For once, transgressions worked in a race walker’s favour. By 20km, reached just under 1:33:00, Caporaso was 54 seconds ahead and extended his lead still further. It proved to be a rash move.

He built up a near two-minute lead, but almost as quickly as he went away, he got reeled in.

Banzeruk claimed it was hard going after 45km, but the threatened Antonelli not only got a medal, but a PB by a massive four minutes.