Croatia’s Sandra Perkovic took a comfortable victory in the women’s discus to highlight the second day of competition at the Mediterranean Games on Thursday (28) in Tarragona, Spain.

Despite breaking the championships record, the reigning Olympic, world and European champion only recorded one valid throw, her opening effort. Everything seemed ready then for her trademark festival of heaves in the 70-metre region but the 28-year-old had technical problems in all her remaining attempts and could not go further.

Perkovic, who has thrown no less than 11 times beyond the 70-metre mark throughout her illustrious career, remains unbeaten so far this year after six outings. In the fight for the minor podium spots Portugal’s Liliana Ca grabbed silver thanks a 60.05m performance ahead of Greece’s Chrysoula Anagnostopoulou (58.85m).

The women’s 400m promised to be a fierce battle between the championships record holder Libania Grenot and Cyprus’ Eleni Artymata. The 34-year-old Italian went out quickly and soon caught the Cypriot who ran just to her outside in lane four. However, in the second bend Artymata managed to approach the European champion and finally overtook her some 70 metres before the finish to romp home in a massive PB of 51.19 for Grenot’s 51.32, still a season’s best for the Cuban-born athlete. Artymata is a former 100/200m specialist who made the final at the latter distance at the 2009 World Championships in Berlin.

The men’s event was taken by Italy’s Davide Re in 45.26, a competition record, well clear of Spain’s Lucas Búa, runner-up in 45.91. The Spaniard was the fastest entrant fresh from a recent PB of 45.25 but Re became a clear winner and improved his career best by 0.05. On a blanket finish, Mamoudou-Elimane Hanne of France landed bronze ahead of Italy’s Michele Tricca, both credited with 46.35.

Gun to tape win for Gega in steeplechase

Albania’s Luiza Gega was a commanding winner in the women’s 3000m steeplechase. The 29-year-old took charge of the race from the early stages with a 3:03.32 opening kilometre, with none of her rivals daring to join her at such a frantic pace. Not even Tunisia’s 2012 Olympic champion Habiba Ghribi, who travelled 30 metres behind the Albanian by then.

The fastest event of the program witnessed a Turkish double in the men’s section thanks to the European silver medallist Jak Ali Harvey and Emre Zafer Barnes. Harvey, who boasts a 9.92 lifetime best, dominated from the gun in 10.10, head and shoulders above his compatriot Barnes who timed 10.32. Italy’s Federico Cattaneo managed bronze with 10.37.

France’s Orlann Ombissa-Dzangue conquered women’s 100m gold by the handsome margin of 0.24 seconds on Greece’s Rafailia Spanoudaki-Chatzieiga, 11.29 to 11.53. Anna Bongiorni of Italy was third in 11.59. 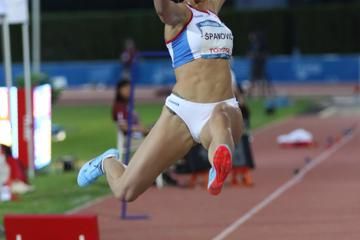