Anita Wlodarczyk in action in the hammer (© Getty Images)

For a country that won medals only in throwing events at the last IAAF World Championships, it came as no surprise that the top performers at the recent Polish Championships were all throwers.

The three-day event in Krakow concluded on Tuesday (21) with world record-holder Anita Wlodarczyk providing the climax of the competition with her performance in the hammer circle.

Wlodarczyk was up against two compatriots who have thrown beyond 71 metres this year, Joanna Fiodorow and Malwina Kopron, but still won by nearly nine metres. After opening with 73.63m, she sent her hammer out to 78.24m, the 10th-best performance in history. She followed it with two throws beyond 76 metres before passing her two final attempts.

“Everything is on track in my preparations for the World Championships in Beijing,” said Wlodarczyk after winning her sixth national title. “Tomorrow I’ll go back to hard work in training.”

Fellow European hammer champion Pawel Fajdek was almost as dominant in the men’s event. Like Wlodarczyk, Fajdek’s best mark came in the second round, throwing 79.74m, and any four of his measured attempts would have easily been enough to win.

The world champion is quietly putting together an impressive winning streak which is now up to 13 competitions this year.

Two-time Olympic shot put champion Tomasz Majewski once again seems to be coming into form at the right time. In a competition of impressive depth with seven men throwing beyond 19 metres, Majewski was the only one to exceed 20 metres, producing a season’s best of 20.80m, having led from the outset.

World silver medallist Piotr Malachowski won his 10th national title in the discus. Up against Robert Urbanek, the man who finished in front of him at the IAAF Diamond League meeting in Oslo earlier this year, Malachowski threw 65.60m in round two, ultimately finishing 1.58m ahead of his domestic rival.

Marcin Krukowski, who recently improved his javelin PB to 85.20m, was the other top performer in the throws, winning his event with a final-round effort of 80.76m.

Patrycja Wyciszkiewicz, fresh from taking bronze at the recent European Under-23 Championships, won the 400m in 51.95. Karolina Koleczek was the other stand-out sprint performer, winning the 100m hurdles in 12.92 (0.9m/s).

The most eagerly anticipated event was the men’s 800m as it brought together a trio of continental champions: European champion Adam Kszczot, European indoor champion Marcin Lewandowski and European under-23 champion Artur Kuciapski.

Lewandowski led at the bell, passed in 53.95, but Kszczot was biding his time before kicking hard for home, eventually forging ahead to win comfortably in 1:46.70. Lewandowski was second in 1:47.32, just 0.32 ahead of Kuciapski.

The women’s two-lap event was similarly competitive and, like the men’s final, was won off the back of negative splits. After an opening lap of 1:03.26, European bronze medallist Joanna Jozwik and world indoor silver medallist Angelika Cichocka began to hike up the pace.

The long-striding Jozwik ultimately got the upper hand, winning in 2:02.99 with Cichocka taking second place in 2:03.28.

Licwinko and Wojciechowski victorious in jumps

World indoor champion Kamila Licwinko made easy work of her win in the high jump. She got over her first three heights at the first time of asking, up to and including 1.93m, by which point there was no one else left in the competition.

She got over a season’s best of 1.98m, just one centimetre shy of her own national outdoor record, on her third attempt and then ended her series with three unsuccessful tries at 2.00m.

Pawel Wojciechowski, the 2011 world champion, overcame an opening-height miss at 5.30m to get over 5.40m, 5.60m and 5.70m on his first attempts. Robert Sobera was still in the competition at that point, but after two failures at 5.70m and one at 5.75m, Wojciechowski was declared the winner.

Elsewhere, 2012 European bronze medallist Artur Noga clocked a season’s best of 13.39 to win the 110m hurdles. Patryk Dobek, competing in his fourth and fifth races in the 400m hurdles – having recently won the European under-23 title in Tallinn and then set a PB of 48.62 to finish second in Monaco – was a comfortable winner in Krakow, clocking 50.80. 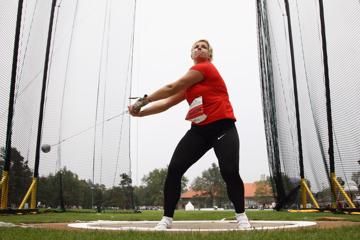