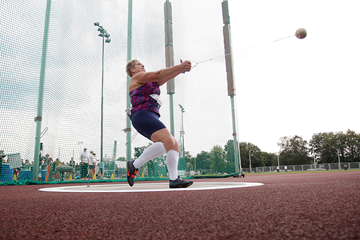 Despite rain on two of the three days, there was a host of world-class performances – particularly in the throws – at the Polish Championships in Bialystock, which concluded on Sunday (23).

Anita Wlodarczyk provides headlines every time she competes on Polish soil, and this time was no exception as the world and Olympic champion delivered another dominant performance in the hammer. She produced the first 80-metre throw in the world this year with her winning mark of 80.79m, the fifth best mark of all time behind her own top four performances.

Wlodarczyk's series featured four more throws in excess of 78 metres, well beyond what any other woman in the world has achieved this year.

“I have been waiting for an 80-metre throw since May,” said Wlodarczyk. “This was my eighth national title, so I wanted to get a distance starting with eight here.”

Behind Wlodarczyk, there were great performances by Poland's other top hammer throwers. 22-year old Malwina Kopron went out to a PB of 75.11m in round one, moving to fifth on this year's world list and third on the Polish all-time list behind only Wlodarczyk and the late Olympic champion Kamila Skolimowska. In third, Joanna Fiodorow set a season's best of 73.82m, her longest throw since 2014.

There was a major upset on day two, as two-time world hammer champion Pawel Fajdek lost the national title to world and Olympic bronze medallist Wojciech Nowicki. This was Fajdek's first loss since last year's Olympic Games and only his third since the beginning of 2015.

Nowicki earned the first national title of his career with a personal best of 80.47m, a distance no thrower in the world apart from Fajdek has bettered this year.

Fajdek had technical problems throughout the competition, sending the hammer beyond 80 metres, but landing outside of the sector. He had no valid throws after three rounds, but with only eight throwers in the competition, he was allowed three more chances. He finally got in a valid throw in the fourth round and his best of the day came in the sixth round with 78.64m.

But Nowicki, who held the lead with 78.96m going into the last round, had also saved his best for last and reached 80.47m to add 16 centimetres to his PB.

“I did not expect to throw this far, since I have been training hard and having some health issues recently,” said Nowicki. “Technically, my throws are still not optimal, but things are moving in the right direction.”

Urbanek went into the lead after 64.37m in round two and extended that to 65.29m on his fourth throw. Malachowski, a 10-time national champion, fought on until the end, but the best he could manage was 64.44m in round five, which left him in second.

Despite the wet conditions on day one, the championships started on a high note with Marcin Krukowski breaking the national javelin record with 88.09m.

His throw broke Dariusz Trafas’s record of 86.77m from 2002 and moved Krukowski to fifth on this year’s world list.

“It is a great feeling to get the national record,” said Krukowski. “I had problems due to overtraining earlier in the season, but everything is now on the right track. I'm going back to training now, but it will only be about putting the finishing touches on my form before the World Championships.”

Michal Haratyk was another first-time national champion, taking the title with a personal best of 21.53m in the shot put. The European silver medallist did not necessarily start as favourite, but he dominated the competition, with each of his puts good enough to take the win.

After setting a personal best of 21.38m in the second round and two more attempts beyond 21 metres, Haratyk did even better with his final attempt of 21.53m.

European indoor champion Konrad Bukowiecki was no match for Haratyk on this occasion. Only two of his valid puts landed beyond the 20-metre line and he ended the competition with a best of 20.21m. This was sufficient for second, but only just, with Jakub Szyszkowski's 20.18m in the last round taking the bronze.

In other throwing event finals, Paulina Guba took the women's shot put win with 17.92m and Marcelina Witek was the top javelin thrower with 59.21m.

The expected two-man battle in the pole vault ended with Piotr Lisek taking the first outdoor national title of his career.

2011 world champion Pawel Wojciechowski cleared 5.70m on his third attempt but bowed out at the next height. Two days after winning at the IAAF Diamond League meeting in Monaco, Lisek went on to clear an outdoor PB of 5.85m and had a close attempt at 5.90m.

Kamila Licwinko needed just one jump to secure her sixth Polish high jump title, but the 2014 world indoor champion was not satisfied with stopping at her opening height of 1.85m. She went on to clear 1.95m on her first attempt and it was only at 2.00m, a would-be national outdoor record, that Licwinko had to bow out after three failures.

European indoor champion Sylwester Bednarek was nearly as dominant in the men's event. After clinching the gold with a first-time clearance at 2.25m, he cleared 2.30m on his second try and ended with three unsuccessful attempts at 2.33m.

Anna Jagaciak-Michalska won her sixth and seventh national titles by taking a horizontal jumps double, winning the triple jump with 14.05m and the long jump with 6.40m.

A close battle was expected between Olympic finalist Joanna Jozwik and European 1500m champion Angelika Cichocka in the women's 800m. Cichocka showed she was the woman in form with a gun-to-tape win in a World Championships qualifying mark of 2:00.91, having covered the second lap in exactly 59 seconds.

Jozwik was unable to challenge Cichocka’s lead and eventually finished several metres back in 2:01.58.

With Cichocka opting not to contest the 1500m, the way was clear for Sofia Ennaoui to score a decisive victory over the distance. The European indoor bronze medallist took off after a slow opening 800 metres and never looked back as she reached the finish in 4:16.56, more than five seconds clear of Danuta Cieslak.

Both of Poland's 800m stars, Adam Kszczot and Marcin Lewandowski, opted for the 1500m this time. Kszczot, running his first serious race over the distance, set out at a fast pace and strode away from his rival over the first two laps. He held on to reach the finish well ahead in 3:38.31, a personal best by more than eight seconds.

Lewandowski, fresh from setting a national record at the IAAF Diamond League meeting in Monaco on Friday, finished a distant second this time with 3:41.82.

In their absence, there was nonetheless an interesting and fast race in the 800m final. European U23 1500m bronze medallist Michal Rozmys came through for the win in a PB of 1:45.70, inside the World Championships qualifying standard.

Artur Kuciapski, the 2014 European silver medallist, showed signs of returning to form, but the 1:46.28 he ran to take second was not sufficient to qualify for the World Championships.

The women's 400m proved to be the most competitive sprint event in Bialystock. In the absence of Polish No.1 Justyna Swiety, Iga Baumgart powered past Malgorzata Holub in the final straight to take the victory in 51.71, the first sub-52-second run of her career. Holub took second place in a season’s best of 51.97 with Martyna Dabrowska third with 52.37.

Rafal Omelko was the comfortable winner of the men's one-lap event with 45.67.

World 400m hurdles finalist Patryk Dobek entered the championships without a qualifying mark for London, but he ran all out in the heats and was rewarded with 49.15 to book himself a place on the World Championships team. He won the following day’s final by nearly a second in 49.53.

World U20 silver medallist Ewa Swoboda was also hoping to earn a ticket to London in the 100m. She won the final in 11.29, which was 0.03 slower than her target, but she might still make it to the World Championships through the invitation process.

There were no surprises in the sprint hurdles. After equalling her season's best with 13.07 in the heats, Karolina Koleczek took the women's 100m hurdles in 13.17. Damian Czykier was the clear winner of the men’s 110m hurdles in 13.44.