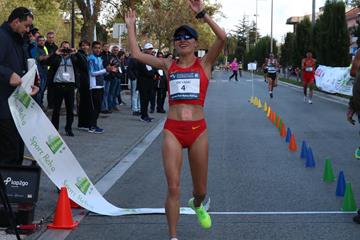 Competing in cold and windy conditions that strongly impacted the performances, Qieyang, the 2012 Olympic 20 km silver medallist, dominated the women's competition, clocking 1:29:00 to triumph at this race for the third time after victories in 2016 and 2018.

Qieyang took the lead after the first lap of this one-kilometre urban circuit and forged on without facing any serious threat. Her performance was well under the 1:25:37 she produced at the National Grand Prix in Huangshan last month, the fastest time in the world this year.

But after her effort, Qieyang said she was "satisfied" with her performance, given how the weather conditions impeded her efforts to mount a fast solo effort.

Inna Kashyna of Ukraine, the 2017 World University Games winner, produced the day's biggest surprise. The 27-year-old broke away from the chase pack in the middle stages of the race en route to a 1:29:30 runner-up finish, another 30 seconds clear of Colombian Sandra Arenas, who finished third.

In the men’s race, Arevalo, the 2017 world champion over the distance, clocked 1:21:15 to secure his third Rio Maior victory as well, after wins in 2015 and 2017. But the 27-year-old didn't move to the front until the final lap, eventually breaking free from a pack of ten with a 3:42 final kilometre.

"This race was very tough, because the weather conditions forced me to slow down twice, at the 12th and 14th kilometres," Arevalo said. "But after that I could improve my pace in the last kilometre and take the win."

Arevalo said he'll now focus on the Pan-American Games in Lima in August.

"I worked a lot to win in Rio Maior, but we started very slow and after that only the final places were important," Garcia said. "This was the second time I lost to Arevalo in the last lap (La Coruña and Rio Maior), and I’m looking forward to working to defeat him in the next competition."