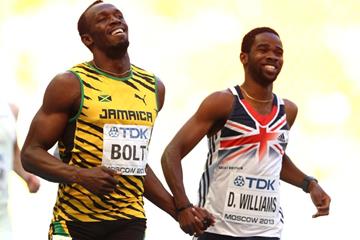 Usain Bolt saw the daylight when he turned out for the heats of the 200m at Luzhniki Stadium on Friday morning. After what was the equivalent of a brisk, early-morning stroll (for him), the defending champion was through to the semi-final round to be held in the evening session.

Strictly speaking, Bolt has seen the daylight in Moscow. Both the first round and semi-final of the men’s 100m were conducted before darkness fell. But, unless he so chose, the great man has not had to get up before lunch until today.

World University Games 100m and 200m champion Anaso Jobodwana of South Africa and Britain’s Adam Gemili were fastest qualifiers with wins in 20.17 in heats two and six, respectively. That was a personal best for Gemili, last year’s World junior champion at 100m, and looks like vindication of his decision to concentrate on the 200m only at these championships.

It was just as tight at the other end of the scale, with Brazil’s Bruno De Barros and Karol Zalewski of Poland both fourth in their heat and running 20.60 to tie for the third and final non-automatic qualifying position. When the respective photo-finish results were analysed, it was the Pole who advanced to the semi-finals.

The other two non-automatic qualifiers were Alex Quinonez of Ecuador, fourth in heat two in 20.47, and Likourgos-Stefanos Tsakonas of Greece, fourth in heat one in 20.55.

Jobodwana won heat two from European champion Churandy Martina of the Netherlands, 20.37, and Mosito Lehata, 20.46. Lehata will become the first Lesotho sprinter to run in a semi-final. He also advanced to the semi-final in Daegu two years ago, but did not run. He is the Lesotho record-holder at 20.37.

Warren Weir, the Olympic bronze medallist and a man confident of taking up the challenge to his team-mate Bolt in Moscow, won the third heat in a comfortable 20.34 from Spain’s Bruno Hortelano and Jimmy Vicaut of France. Hortleano broke the Spanish record with 20.47.

Alonso Edward of Panama, silver medallist behind Bolt when he won the Berlin 2009 200m in World record time, took out heat four ahead of Nickel Ashmeade and yet another Caribbean sprinter in Antoine Adams of St Kitts and Nevis.

The fifth heat was the closest of the round, Britain’s James Ellington taking it in 20.55 just ahead of a close scrap between Jason Livermore, Wallace Spearmon and Zalewski. Livermore and London Olympic fourth-place finisher Spearmon both got through in 20.59 with the Pole ultimately joining them in the semis as a fastest non-automatic qualifier.

Gemili easily won the sixth heat with his 20.17 ahead of USA’s Isiah Young and Japan’s Shota Iizuka, 20.71.

Which only left it for Mr Bolt to wipe the sleep from his eyes and cruise through the final heat in 20.66 – 0.06 slower than the slowest of the non-automatic qualifiers. One suspects there was quite a bit more left in the tank.