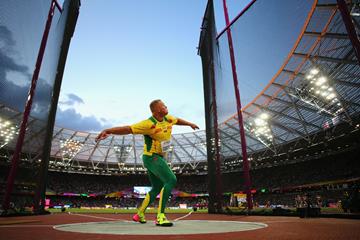 Andrius Gudzius produced the first major upset at these championships after producing a narrow victory in the men's discus throw and leading what looks to be a changing of the guard in the event.

" I was thinking about a medal but I did not expect gold," said the 26-year-old Lithuanian, whose 69.21m lifetime best effort in the second round held up over the next four to secure the title, the first for the nation since throwing legend Virgilijus Alekna won his second in 2005. “Everybody in my country was expecting a medal from me and I am happy to bring one home.”

Gudzius, who illustrated his potential and talent when taking the world junior title in 2010 and the European U23 title three years later, set the tone from the first round, throwing 67.52m to take the early lead, one he'd only briefly relinquish.

But after fouling his first throw, world leader Daniel Stahl put his gold medal aspirations on full display with a 69.19m effort in the second round, to take the lead. It was short-lived however, with Gudzius's releasing his big effort with the very next throw of the competition to retake the lead by just two centimetres.

That round, which included a 68.03 lifetime best for US champion Mason Finley, took the wind from the field's collective sails, with little movement following from that point on. That's not to say that Stahl gave up.

The towering Swede hit 66.68m in the third round and 68.57m in the fourth, his last serious challenge before ending the competition on the short end of the event's closest 1-2 finish in the history of the World Championships.

"Daniel is the best this season but at every competition we start from zero,” Gudzius said. “It was a drama but I was lucky to beat him by these two centimetres."

The win secured, Gudzius ended the competition with a solid 67.89m before wrapping himself in his national flag.

Stahl too was content with his first medal, as was Finley, who arrived in London with a 66.72m lifetime best set one year ago.

“I have been working hard and I have had a fantastic season and been consistent in every meeting,” Stahl said. “Well, my technique could be better. But I am really proud. This silver medal is really great.”

"I knew that maybe I could get a medal," said Finley, who improved his lifetime best twice this evening. "And now a bronze medal - oh my gosh, it is incredible. I have dreamed about this kind of thing since high school. I cannot describe this feeling."

Jamaica's Fedrick Dacres, the early season world leader, produced a consistent series, topped to a 65.83m throw in the fourth round, finished fourth, the best finish ever for Jamaica at a World Championships.

Defending champion Piotr Malachowski never quite found his rhythm and was never a threat. His 65.24m best came in the fifth round, good enough for fifth.

Three-time winner Robert Harting of Germany, who won the Olympic title in this stadium five years ago, was sixth, producing a best of 65.10.