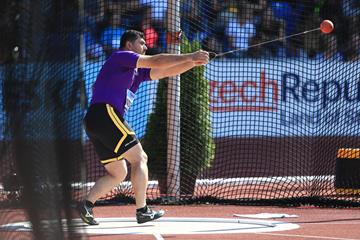 A masterful display of control and consistency earned Tajikistan’s 36-year-old Rio 2016 champion Dilshod Nazarov victory in the men’s hammer as Team Europe’s Wojciech Nowicki, who tops the 2018 world list with 81.85m, failed to progress beyond the first three qualifying throws.

Nazarov took a first round lead of 75.05m, and never let the competition out of his control thereafter as he put together five successively longer throws.

He revealed afterwards that he was on a personal mission, having only won silver at last month’s Asian Games, where he threw 74.16m behind Qatar’s Ashraf El-Seify, who recorded 76.88m.

“I was very well prepared for this event,” Nazarov said. “I had two reasons to win here. First of all I wanted to help Team Asia-Pacific receive extra points to go higher in the team standings.

“But secondly I performed incredibly badly a the Asian Games and I had to prove to the world that it was just an absence of pattern.

“Today I improved in every round, which is my usual tactic for all competitions. I’m glad it worked perfectly today.”

As the Tajikistan athlete extended his margin in qualifying with second and third rounds of 76.09m and 76.54m, the European duo who were favoured for this event, Nowicki and Hungary’s Bence Halasz, fourth in this year’s world list with the 79.57m, were teetering on the brink of humiliation as both failed to register a mark in their first two throws.

Nowicki’s first effort sent the turf flying well beyond the 75 metres line, but was annulled as he lost control and put his foot out of the front of the circle, Still, it was a big marker.

The European champion also stepped out of the circle in sending the hammer to a meeting point with earth on or about the 75m line, throwing up his large hands briefly in frustration as he left the cage.

Halasz got things back on track as he registered with his third effort, moving up to third place with 74.80m. Nowicki also got on the board with his last qualifying throw, but 71.74m meant it was his Hungarian team-mate who would carry the Europe banner onwards. He looked unhappy about this.

Nazarov continued his impressive upward mobility with a fourth round effort of 76.87m, which Halasz followed with a decent, but hardly sensational 74.16m. Could Team Americas’ Diego Del Real of Mexico, with a qualifying best of 75.86m, beat it? Not on this occasion, as he reached 73.04m.

Only one man could displace Europe from the final now – Egypt’s, and Team Africa’s Mostafa Elgamel, ninth in this year’s world list with 77.71m. And he did, reaching the fifth-round finale by dint of three centimetres as he reached 74.19m.

With the Europeans out, Nazarov continued his unerring sequence with a final effort of 77.34m, close to his season’s best of 78.18m. Gamal produced his best of the competition in response, but at 74.22m it was only enough for second place.