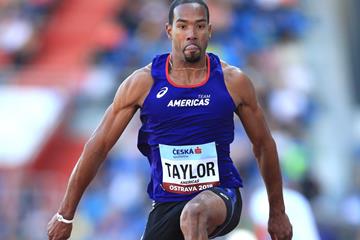 It was clear from his very first effort in the men’s triple jump that world and Olympic champion Christian Taylor, representing Team Americas with a metaphorical joker on his back, was not going to be beaten today.

A mark of 17.59m turned out to be more than half a metre farther than anyone could manage in qualifying, and indeed the best mark registered in the competition.

But Taylor, perhaps having a special reason to end the season on a high after being beaten to a seventh Diamond League title in Brussels by his perennial rival Pedro Pablo Pichardo, maintained his own high personal standards throughout, with every one of his four jumps being over 17 metres.

Americas’ second athlete, Cristian Napoles of Cuba, earned fifth place and four points with a hugely creditable 17.07m that would have earned him progression had he been teamed with anyone but Taylor. It secured overall team victory and, thanks to the joker, double team points.

Team Africa’s Hugues Zango from Burundi also excelled as he moved through to the semi-finals with a best qualifying effort of 17.02m.

He was accompanied by Portugal’s 34-year-old Nelson Evora of Portugal, the 2008 Olympic champion, who had a qualifying best of 16.58m, and Team Asia/Pacific’s Arpinder Singh of India, who reached 16.59m.

Singh and Evora bowed out in the fourth round with respective efforts of 16.33m and 16.28m. Zango earned his final place with 16.44m. Taylor, despite sailing through with 17.41m, looked particularly frustrated with an effort he clearly hoped had been destined for even better things.

When the Burundi athlete recorded 16.46m as his final attempt, a matter for obvious frustration, victory was a formality for the US athlete – but still he pushed, recording a final effort of 17.31m.

“It was absolutely amazing for me to get another title at the Ostrava stadium,” said Taylor. “Today it wasn’t only my victory but the team’s, and I’m happy Cristian and I were able to bring double points.

“Even though I had a very strong first attempt, I had to be focused on the field until the last jump. Such are the rules! You cannot relax until you win.”