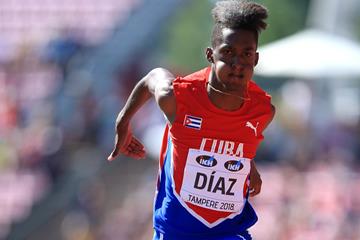 One year after winning the world U18 triple jump title in Nairobi last year, Cuba’s Jordan A. Diaz added the world U20 title to his burgeoning collection with consummate ease.

A first round jump of 16.84m represented a rather average effort for the precocious Cuban jumper who has set some lofty standards in the U20 ranks this season but this still would have won the title by 40 centimetres. He improved to 16.91m with his second jump before surpassing Lazaro Martinez’s championship record of 17.13m by two centimetres in the third round. He matched his championship record and winning distance in the fifth round before finishing his series with a no-jump.

Diaz, 17, is one of the most exciting prospects to come off the seemingly indefatigable Cuban production line of fine horizontal jumpers and there were whispers around the arena that the world U20 record of 17.50m could be bettered. Volker Mai’s mark of 17.50m which dates all the way back to 1985 remains intact but Diaz still has two full seasons in the junior ranks to break the record set 16 years before he was born.

“I just focused on myself, on my technique and on enjoying it out there,” said Diaz. “I’m just young and I can improve but I think I’m ready to compete with the seniors. I’m really happy because the gold medal is the one Cuba was lacking in these championships.”

Having already extended his world U18 best to 17.41m this season, Diaz led the world U20 lists by a yawning gap of 65 centimetres. The second-ranked Martin Lamou was considered the only competitor who could provide Diaz with a modicum of opposition but the Teddy Tamgho-coached athlete injured his hamstring during warm-up and was less than fully fit for the final.

Lamou opened his series with 16.44m followed by a no-jump before eschewing his four remaining jumps, relatively confident his opening effort would keep him ensconced in a medal position. “I’m going to end my season now and take a little break,” said the reigning European U20 champion, who was confident of challenging Diaz after the qualifying round. “I wish I could have given the audience more.”

Lamou’s teammate Jonathan Seremes won the bronze medal with 16.18m, one place ahead of Aramayis Sargsyan whose fourth-place finish with 15.89m was Armenia’s best ever showing in any event since they made their debut at the World U20 Championships in 1996.

There was a slim prospect of a Kenyan medal as well after Philip Musyoka Mwema moved into the reckoning after a second round jump of 15.70m but he was shunted down the order in the second half of the final, finishing eighth overall.