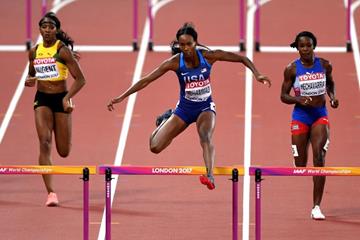 In an opening round where 24 of the 39 athletes progressed to the next round, there were few surprises in the heats of the women’s 400m hurdles.

Olympic champion and world leader Dalilah Muhammad kicked off proceedings by winning the first heat. Muhammad, who has lost all three of her races since winning the US title in 52.64, looked in control the whole time and won in 54.59, the fastest time of the day.

Two-time world champion Zuzana Hejnova won the second heat. The Czech record-holder ran a controlled race and could afford to ease down towards the end, crossing the line in 55.05. In a strong heat, Olympic silver medallist Sara Slott Petersen took the second of four automatic qualifying spots in 55.23, while USA’s Diamond Trophy winner Cassandra Tate placed third in 55.48.

Jamaica’s Ristananna Tracey had a slight lead over world silver medallist Shamier Little down the home straight in the third heat, but Little stuttered badly before the final barrier, almost coming to a standstill and allowing Switzerland’s Petra Fontanive to come past her.

Tracey won in 54.92 with Fontanive taking second in 56.13. Little recovered to take the third automatic qualifying spot in 56.18.

USA’s Kori Carter went out hard, as is her style, in the fourth heat. Having built up a two-metre lead going into the home straight, she took her foot off the pedal for the rest of the way and won in 54.99.

The home crowd roared on Eilidh Doyle, but the 2014 European champion was overtaken by Wenda Nel in the closing stages, 55.47 to 55.49, with both advancing automatically.

Like Carter, Switzerland’s Lea Sprunger won the fifth and final heat from an inside lane. Jamaica’s Rhonda Whyte made up ground in the final stages, but Sprunger crossed the line first in 55.14 with Whyte just 0.04 in arrears. Nigeria’s Glory Nathaniel set a PB of 55.30 to finish third.