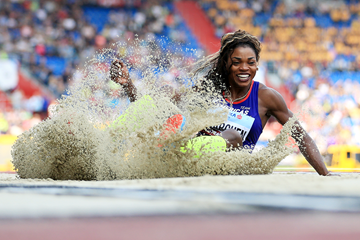 Caterine Ibarguen, the Rio 2016 triple jump champion from Colombia, faced down her competitive nemesis, Olga Rypakova of Kazakhstan, to win for Team Americas and ensure that their gamble on playing their women’s joker for the day on this event paid off.

He was banking upon Ibarguen and her United States team-mate Tori Franklin, who top the world 2018 lists with 14.96m and 14.84m respectively, dominating again to enable their joint points total to be doubled – albeit that only one of them would be able to progress beyond the three qualifying rounds as their continent’s representative.

An opening effort of 14.31m from Ibarguen was enough to head qualifying, ensuring she went through to the semi-final involving the highest ranked jumper from each continent.

In the fourth round, Africa’s representative Zinzi Chabangua was unable to continue, which left three competitors contesting the final decisive jump-off.

Rypakova, representing Asia Pacific, managed 14.26m, and Team Europe’s Paraskevi Papachristou reached 14.22m, which was the target for the flamboyant Colombian as the last to go in the round.

Ibarguen’s effort of 14.76m saw her through to the fifth-round finale against the woman who beat her to the London 2012 title and, four years later, ended her run of victories at 34.

As she stood in the sand, arms aloft, the Americas joker decision was vindicated as their combined score of 12 points won the event from Asia and Europe, who both scored nine points.

"Since the rules of the competition are new, I had to challenge myself in a different way," Ibarguen said. "It was demanding but I wanted to do my best for Team America."