Kenya’s Joseph Kyengo Munywoki made a late break in the men’s race to win the title in 2:12:14, the second-fastest time in the 25-year history of the race.

A lead pack of four women – Daba, Japan’s Kikuyo Tsuzaki, Ethiopia’s Meseret Gebre Dekebo and Kenya’s Eunice Kioko – set off well inside 2:30 pace, covering the opening 10 kilometres in 35:17. The pace slipped slightly as they reached the half-way mark in 1:15:03, but it was clear that the course record of 2:36:51 was under significant threat.

Kioko was the first to fade; by 25km, she trailed the lead trio by 14 seconds. Daba, Tsuzaki and Dekebo reached 35km in 2:05:25 – still well inside course record schedule – but Dekebo was unable to sustain the pace for much longer and she soon fell back, leaving Daba and Tsuzaki out in front.

With just a few kilometres remaining, Daba managed to open a gap on Tsuzaki before going on to win in 2:31:22, smashing the course record by four-and-a-half minutes. The other podium finishers were also inside the old mark as Tsuzaki took second place in 2:31:33 and Dekebo placed third in 2:33:28, PBs for both.

The men’s race played out in similar fashion with a small group breaking away in the early stages. Munywoki was joined by 2013 winner Duncan Cheruiyot Koech of Kenya, Richard Kiprono Bett and Ethiopia’s Gadisa Birhanu as they passed through the 10-kilometre checkpoint in 30:28 before reaching half way in 1:05:10. Their splits suggested the course record of 2:11:45 could be broken.

The leading duo was still on schedule for a course record with just seven kilometres left, but they were unable to maintain the required tempo. Munywoki broke from Birhanu in the final few kilometres and went on to win by almost a minute in 2:12:14. Birhanu crossed the line in 2:13:09 with Koech taking third in 2:14:13.

A bit further down the field, Zolnerovics’ controlled approach paid off. He passed a fading Bett with about five kilometres remaining and almost caught Koech. But although he missed the podium by just 10 seconds, he was rewarded with a Latvian record of 2:14:23. 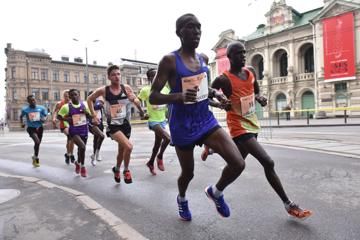