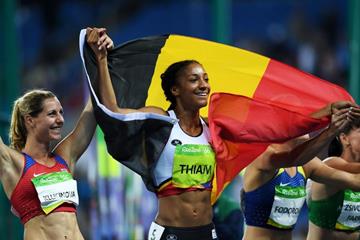 It’s never over until it’s over. Or at least that’s what all combined events athletes have to believe when they run all the different possible outcomes through their heads as they line up for the final event.

Defending champion Jessica Ennis-Hill had been under pressure throughout the duration of the heptathlon. She kept her cool and still managed to produce her best score since winning the 2012 Olympic title, but ultimately it wasn’t quite enough to stop rising talent Nafissatou Thiam, who took gold with a Belgian record of 6810.

For Thiam, the heptathlon long jump was a tale of three rounds.

She landed near the seven-metre line on her first attempt and her jump was actually measured at 6.93m before officials realised that it was a foul; she hadn’t left a mark in the plasticine simply because she had stepped so far over the board, by about 60 centimetres.

For a brief moment, her hopes of a medal were in jeopardy.

The Belgian then landed a safe 6.18m with her second attempt to consolidate her position in the overall standings. But there was more to come.

With her last jump of the competition, she sailed out to a lifetime best of 6.58m, the best mark of the day and just five centimetres shy of the Belgian record.

More importantly, though, she regained the overall lead and looked to have a genuine shot of taking the gold medal, ending the event with a five-point lead over Ennis-Hill: 5018 to 5013.

Ennis-Hill’s 6.34m leap was by no means a disaster, but the Briton would have been hoping to get closer to the 6.63m PB she set earlier this year in Ratingen.

Teammate Katarina Johnson-Thompson fared much better than she did at last year’s World Championships and recorded two valid jumps: 6.51m and 6.47m. Like Ennis-Hill, she was some way down on her best marks this year, though.

Carolin Schafer, who suffered a similar fate to Johnson-Thompson at last year’s World Championships with three fouls in the long jump, looked to be heading in a similar direction yet again. But after recording two fouls here in Rio, she pulled out a jump of 6.20m to remain in the competition.

German teammate Claudia Rath moved up several places on the leaderboard thanks to her leap of 6.55m. Two-time European champion Antoinette Nana Djimou also climbed up the overall standings after jumping 6.43m.

Thiam, carrying an elbow injury, knew that she may only be able to take one throw in the heptathlon javelin. She needed to make it a good one if she were to maintain her overall lead.

It was more than good.

Her 53.13m was a lifetime best and ensured she went into the final event, the 800m, with a comfortable lead of 142 points over Ennis-Hill. In 800m terms, that translates to 9.10 seconds; the difference in their season’s bests is 5.82 seconds.

The javelin generally went to current form. Ennis-Hill threw 46.06m to maintain her position in second place overall, while Theisen-Eaton produced the second-best throw of her life with 47.36m, keeping her in contention for a medal.

Johnson-Thompson, meanwhile, was fairly close to her season’s best with 36.36m, but needed to be nearer her lifetime best of 42.01m to keep alive her chances of a top-three finish.

World bronze medallist Laura Ikauniece-Admidina was the top performer in the javelin. The Latvian threw a PB of 55.93m to move from 12th to fifth place overall.

Ennis-Hill knew she faced an uphill task of finishing about 10 seconds ahead of Thiam in the 800m in her bid to retain her Olympic heptathlon title. But she wasn’t going to give up without trying.

Thiam, meanwhile, lined up for the 800m knowing that she needed to produce the race of her life to stay within sight of Ennis-Hill if she were to maintain her lead in the overall standings.

And Theisen-Eaton wasn’t going to surrender the bronze medal without a fight.

Not long after the gun went for the final heptathlon 800m heat, Ennis-Hill darted to the front but was closely pursued by her fellow double-barrelled competitors: Theisen-Eaton, Ikauniece-Admidina and Johnson-Thompson.

Ennis-Hill went through the first lap in 1:02.84, putting her on course for a potential lifetime best. The others in the lead pack were still close to Ennis-Hill as the covered the second lap, but the pace slightly faded, along with Ennis-Hill’s chance of an 800m PB.

The Briton stopped the clock at a season’s best of 2:09.07 with Ikauniece-Admidina running a huge PB of 2:09.43 close behind her. Theisen-Eaton crossed the line in 2:09.50, roughly one second ahead of Johnson-Thompson.

The big question – indeed, what the whole two-day contest boiled down to – was: how far behind was Thiam?

The Belgian was still half way up the home straight, but soon it became more and more clear that she wasn’t as much as 10 seconds behind Ennis-Hill. Instead the difference was little more than seven seconds as the 21-year-old clocked 2:16.54, her fifth personal best of the competition.

It meant that Thiam took the gold medal with a national record of 6810, moving to 16th on the world all-time list to sit in between 2000 Olympic champion Denise Lewis and Theisen-Eaton.

“It's crazy,” said Thiam. “I wasn't expecting that – maybe top eight, but not the gold.

“It was very hard coming back from being injured,” she added. “I wasn't sure if I would even make these Games, but we did a lot of work with the physio and it worked.”

Ennis-Hill settled for silver with a score of 6775, her best mark since winning Olympic gold four years ago. Theisen-Eaton took bronze with 6653, her best ever mark at a major championships.

Despite her huge PB in the final event, world bronze medallist Ikauniece-Admidina wasn’t quite able to make it on to another global championships podium, but finished with a highly respectable score of 6617. Only once before, in Barcelona 1992, has a score that high not been enough for an Olympic medal.

Schafer clocked a season’s best of 2:16.52 in the 800m to stay ahead of Johnson-Thompson on the leaderboard. Schafer scored 6540 and extended her lead at the top of the 2016 IAAF Combined Events Challenge standings, while Johnson-Thompson – who clocked 2:10.47 in the 800m – scored 6523, the second-best mark of her life.

In a competition of unprecedented depth, six women surpassed 6500 for the first time in history. Best marks-for-place were set for sixth, seventh, eighth, 10th, 11th, and every other position from 13th downwards.