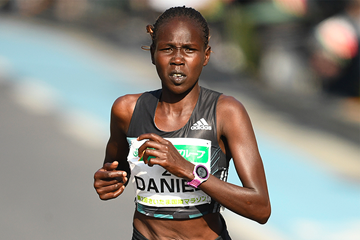 A four-woman race after just a kilometre, by the halfway point it was down to a duel. Not long after that, Kenya’s Flomena Cheyech Daniel was cruising all alone to victory in the Saitama International Marathon, an IAAF Silver Label Road Race, on Sunday (13).

Cheyech pulled away from an ailing Ethiopian Amane Gobena after 25 kilometres to win in a race record of 2:23:18 for her sixth career title and first in Japan, where she spent four years from 2007 running for the Uniqlo corporate team.

Gobena, affected by an upset stomach, held on to finish second in 2:25:58 in the second edition of the race in this city 30 kilometres northwest of Tokyo. Kenya’s Monica Jepkoech was third in 2:28:56 and Ethiopian Atsede Habtamu fourth in 2:29:44.

Mizuho Nasukawa was the top finisher among a thin Japanese contingent, winning a last-stretch dash with Australia’s Cassie Fien for fifth place in 2:33:16, a time that will hardly be good enough to earn a place on Japan’s team for the IAAF World Championships London 2017.

For Cheyech, the victory ended a marathon title drought dating back to her gold-medal run at the 2014 Commonwealth Games. Her winning time was also the fastest since she posted her personal best of 2:22:44 in winning the Paris Marathon that same year.

“I have not won a marathon and not run such a time [for a while], so I’m very happy,” said Cheyech, who finished fifth in Tokyo and second in Amsterdam in 2015, and sixth in Boston earlier this year. “I prepared for this race for about five months.”

After Ethiopia’s Atsede Baysa won last year’s inaugural race in 2:25:44, organisers tweaked the course to eliminate some of the tougher hills. But they left enough to Cheyech’s liking.

“This course was very nice,” she said. “As I’m used to when I train in Kenya, we always use up-and-downs most of the time.”

In adding to her career victories in Porto Alegre, Vienna, Toronto, Paris and the Commonwealth Games, Cheyech also got a boost from her former team and friends in the host country, with whom she had a chance to renew acquaintances.

“I met a friend, she was manager when I was working at Uniqlo. Before I left, she told me I have to fight [in the race], and some called me on the telephone. I think some who know me cheered me on the way.”

On a clear day with temperatures reaching 18C, the four Africans formed the top group with two pacesetters as they went through the first kilometre in 3:10. Race officials had set a target time of 3:24 for the rabbits, and they eventually settled into that pace as the leaders went through the 5km mark in 16:51.

By 20 kilometres, Cheyech and Gobena started shedding Jepkoech and Habtamu, and had opened a 13-second gap as they went through the halfway point in 1:11:50.

Then disaster struck Gobena, who had finished second in Tokyo in February in a PB of 2:21:51, the fastest in the Saitama field.

“I prepared very well, but what I ate last night didn’t sit very well and my stomach became very upset from about 21.4 kilometres,” Gobena said through an interpreter, adding the culprit was a pizza sauce. “But no matter what, I wanted to reach the finish.”

With the final pacesetter peeling off after 30 kilometres, Cheyech had a solo run to the finish outside Saitama Super Arena, site of the 2006 world basketball championship. The course also took runners past one of the football stadiums used for 2002 World Cup.

“I felt good and I said I have to try my best,” she said of approaching the finish.

With the top four places all decided, local interest turned to Nasukawa. She was the top name in a Japanese contingent that, according to reports, was thinned out because of a scheduling conflict with a major corporate ekiden in two weeks’ time.

The meet was serving as one of three domestic qualifiers for next year’s World Championships, and the top three Japanese in each are considered for selection. A time of 2:22:30 during that period would also earn automatic selection.

For the 36-year-old Nasukawa, who missed out on the Rio Olympics, this season most likely represents her last chance to earn a place on a national team. She said she will consider either entering Osaka or Nagoya, the remaining domestic qualifiers, or perhaps retire.

Still, Nasukawa showed the determination that made her the 2009 Tokyo champion and 2012 Yokohama runner-up when she held off Fien by one second for fifth place.

“I had said at the press conference that my strongpoint was my never giving up,” Nasukawa said. “When Australia’s Fien came up behind me, I turned on the switch.”

Kaori Yoshida, last year’s runner-up to Baysa, fell off the pace early, then put on a late surge in an attempt to catch Nasukawa. But she ran out of steam and finished ninth in 2:38:37.

Cheyech herself hopes her efforts will win recognition from Kenyan officials in a bid to run in London.

“I have to try to work hard to improve my time and work hard to be selected to the World Championships next year,” she said.