As expected, local star and meeting poster girl Sandra Perkovic dazzled at the 67th edition of the Hanzekovic Memorial in Zagreb on Tuesday (29).

As with most of her appearances at this IAAF World Challenge meeting in recent years, expectations were high as Perkovic, a native of the Croatian capital and one of the most popular sports figures in the country, made her first home outing after winning her second world discus throw in London 16 days ago.

She didn’t disappoint, producing a series that included two throws beyond 70 metres, capped by a 70.83m effort in the fifth round, the fourth best of her career.

“The series was fantastic,” Perkovic said, speaking to reporters at a jam-packed press conference room at the Sport Park Mladost Stadium. “Two throws over 70 metres. And to do it here at home. It was just an amazing night.”

Perkovic needed a few rounds to get used to a new throwing circle --she fouled her first throw and reached 63.31m with her second-- but once she adjusted her speed, things fell into place. A 66.90m followed in round three and a 68.07m in the fourth which fully energised the capacity crowd. Her big blast followed in round five and she then capped the competition with another bomb which landed at 70.44m.

Whitney Ashley of the US was a distance second at 62.91m.

But it was an off-night for her compatriot Sara Kolak, the Olympic champion in the javelin, whose final round effort of 61.86 salvaged an otherwise lacklustre competition hindered by a shoulder injury she’s been carrying since before the World Championships.

That was good enough for second place, behind Elizabeth Gleadle, whose 63.40m secured her first victory outside of her native Canada this season.

The performance of the night on the track came courtesy of Norah Jeruto in the 3000m steeplechase.

From the moment the 21-year-old took over from the pacesetter with four laps to go, she let loose to wage a serious race against the clock. One lap later she was five seconds ahead of her nearest pursuer, a margin she doubled over the penultimate lap.

Her tear continued over the final lap before she powered across the line in 9:04.56, only marginally slower than the lifetime best of 9:03.70 she clocked in Berlin just over 48 hours earlier. She won by more than 15 seconds over compatriots Daisy Jepkemei and Joan Chepkemoi, whose 9:19.68 and 9:20.22 runs were lifetime bests.

In July, the Ethiopian teenager took the 3000m world youth title, finished fifth in the 5000m at the World Championships earlier this month and was fourth in the IAAF Diamond League final in Zurich last Thursday. In Zagreb's 3000m, the 17-year-old sliced nearly 10 seconds from his previous best with a convincing 7:38.90 win. Davis Kiplangat, a 19-year-old from Kenya, was second in 7:39.97, holding off Mohammed Ahmed of Canada, who clocked 7:40.49, a lifetime best.

Neutral athlete Sergey Shubenkov powered his way to a third 110m hurdles victory in Zagreb’s signature event, clocking 13.12, his third fastest time of the season. Running second to Devon Allen of the US over the first half, the former world champion pulled away for good by the seventh barrier to secure his first victory of the year. Allen clocked 13.19.

The women’s race was a more lopsided affair with Christina Manning dominating. Two days after lowering her lifetime best to 12.54, she took another big win in 12.66, well clear of London silver medallist Dawn Harper Nelson Kristi Castlin, who clocked 12.84 and 12.86 respectively.

The men’s 400m hurdles was billed as a battle between youth and experience, in the guise of 20-year-old world leader Kyron McMaster and 31-year-old Kerron Clement, the Olympic champion. But then Abderrahman Samba crashed the party. Clearly ahead by the fourth hurdle, the young Qatari, himself a rising star in the event, kept form through the finish and was never threatened, clocking 48.70. McMaster was second in 49.49, 0.20 clear of South African veteran LJ Van Zyl. Clement faded badly over the final 50 metres, eventually reaching the line sixth in 50.44.

In the 100m, former world champion Yohan Blake notched a confidence-boosting victory in 10.05, well clear of Michael Rodgers, second in 10.14 and Asafa Powell, third in 10.16.

Ajee Wilson, the World Championships 800m bronze medallist, produced a controlled victory in her specialty. Just two days after chasing Caster Semenya to the line in the Berlin 600m, where she clocked a US best of 1:22.39, the 23-year-old ran near the front through much of the first lap before taking control after the first turn of the second. She sauntered across the line in 1:59.13, easily holding off Kenyan Winny Chebet, who clocked 1:59.54. Lindsey Sharp of Great Britain was third in 1:59.76.

The meet got underway on Monday in wildly different conditions at the City Fountains Park in central Zagreb with the men’s shot put. A long late afternoon rain gave way to an evening chill but neither dampened the competition --at least not for everyone.

World champion Tom Walsh prevailed with a 21.50m toss in the third round. Damien Birkinhead was second with a 21.35m toss, a lifetime best by 14 centimetres and a national record for Australia. Michal Haratyk of Poland, who was fifth at the World Championships, was third here with 21.34m.

Walsh was pleased to up his Zagreb win tally to three, but wasn't entirely happy.

"I'm in better shape that this, so I am slightly disappointed," the New Zealander said. "But I've got a few days to regroup before (the IAAF Diamond League Final in) Brussels, and I'll need it there."

Sam Kendricks, another world champion on the programme, extended his unbeaten streak in the pole vault to 13 with a 5.60m clearance, before bowing out with three misses at 5.80m.

Poland's Kamila Licwinko, the London bronze medallist, was the class of the field in the high jump, topping 1.96m to collect a comfortable victory. No other jumper topped 1.90m; neutral athlete Irina Gordeyeva was second on countback at 1.88m over Swede Erika Kinsey and Croat Ana Simic.

Shanieka Ricketts of Jamaica won the triple jump by nearly half a metre with a 14.45m season's best while neutral athlete Aleksandr Menkov won the long jump at 7.98m. 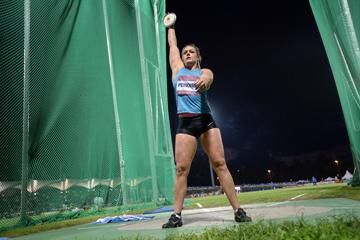 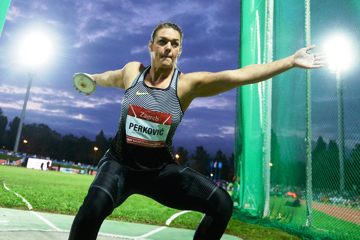 Perkovic and Spanovic triumph in Zagreb...